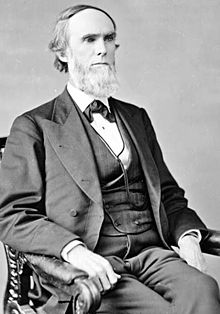 John Scott (born July 24, 1824 in Alexandria , Huntingdon County , Pennsylvania , †  November 29, 1896 in Philadelphia , Pennsylvania) was an American politician ( Republican Party ) who represented the state of Pennsylvania in the US Senate .

After attending Marshall College in Chambersburg , John Scott studied law , was admitted to the bar in 1846 and then began practicing law in Huntingdon . Between 1846 and 1849 he was a prosecutor in Huntingdon County; in 1851 he was a member of the local tax commission.

Scott's political career began in 1862 when he became a member of the Pennsylvania House of Representatives . His father had already sat there from 1819 to 1820; thereafter John Scott Sr. was from 1829 to 1831 a member of the US House of Representatives . In 1868, the younger Scott ran for one of the two Pennsylvania seats in the US Senate and was successful, whereupon he succeeded the Democrat Charles R. Buckalew in Washington on March 4, 1869 . In the Senate, among other things, he chaired the Committee on Claims . After six years in office, Scott did not stand for re-election; he returned to Pennsylvania and worked from 1875 to 1877 in Pittsburgh as general counsel for the Pennsylvania Railroad . He then worked legally until 1895.