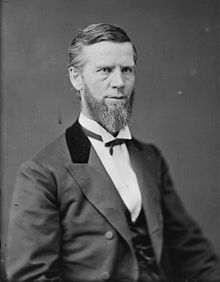 William Andrew Wallace (born November 28, 1827 in Huntingdon , Huntingdon County , Pennsylvania , †  May 22, 1896 in New York City ) was an American politician ( Democratic Party ) who represented the state of Pennsylvania in the US Senate .

In 1836, young William Wallace moved with his parents to Clearfield , where he attended local schools. He later studied law , was inducted into the bar and began practicing as a lawyer in Clearfield. In this city he also worked as a teacher.

His political career began with membership in the Pennsylvania Senate , to which he belonged from 1863 to 1875; he acted as its speaker in 1871 . In 1874 he worked in a commission that should create proposals to expand the state constitution of Pennsylvania. In the same year he was elected to the US Senate in Washington, DC , where he took up his mandate from March 4, 1875. After he was defeated in the attempt to re- elect the Republican candidate John I. Mitchell , he had to leave the Senate on March 3, 1881 again. During this time he had served as Democratic Conference Chairman from 1877 to 1881 ; this position was the forerunner of today's Floor Leader .

After his time in Washington, Wallace resumed his legal practice in Clearfield. From 1882 to 1887 he sat one more time in the State Senate. He also worked in the coal mining industry and took over the presidency of the Beech Creek Railroad . He died while on a business trip in New York and was buried in his hometown of Clearfield.