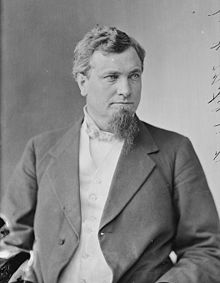 John Inscho Mitchell (born July 28, 1838 in Tioga Township , Tioga County , Pennsylvania , †  August 20, 1907 in Wellsboro , Pennsylvania) was an American politician ( Republican Party ) who represented the state of Pennsylvania in both chambers of Congress .

John Mitchell attended public schools and also received private tuition. From 1857 to 1859 he studied at the University of Lewisburg , later Bucknell University ; then he worked as a teacher until 1861. After the outbreak of the civil war , he joined the Union Army and initially served as a lieutenant ; later he became captain of the 136th Pennsylvania Infantry Volunteer Regiment .

Mitchell later studied law , was inducted into the bar in 1864, and began practicing in Tioga County. There he also served as a district attorney from 1868 to 1871. In 1870 he was the editor of the Tioga County Agitator .

John Mitchell's political career began with membership in the Pennsylvania House of Representatives between 1872 and 1876. He was then elected to the US House of Representatives, to which he was a member from March 4, 1877 to March 3, 1881; Immediately thereafter, he moved to the US Senate and stayed there until March 3, 1887. During this time, he was, among other things, chairman of the committee for the Mississippi River .

After leaving Congress, John Mitchell served as a judge . He served on the Court of Common Pleas of the 4th District of Pennsylvania from 1888 to 1899 before being appointed to the state Supreme Court for a term .