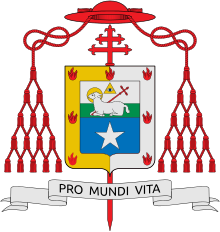 Cardinal coat of arms of Urosa

Urosa was born in Caracas and grew up in Canada . After studying Catholic theology at the Pontifical Gregorian University , Urosa received the sacrament of ordination on August 15, 1967 from José Cardinal Quintero Parra . He was then initially a professor and later rector of the San José seminary in Caracas. Before he was appointed bishop, Urosa was vicar general of the Archdiocese of Caracas.

Pope John Paul II appointed him titular bishop of Vegesela in Byzacena and auxiliary bishop in Caracas on July 3, 1982 . The Archbishop of Caracas José Alí Lebrún Moratinos donated him the episcopal ordination on September 22nd of the same year; Co- consecrators were Domingo Roa Pérez , Archbishop of Maracaibo , and Miguel Antonio Salas Salas , Archbishop of Mérida . In 1990 he was called to be Archbishop of Valencia in Venezuela .

Pope Benedict XVI appointed him on September 19, 2005 Archbishop of Caracas and Primate of Venezuela . In solemn consistory on 24 March 2006, the Pope took him as a cardinal priest with the titular church of Santa Maria ai Monti in the College of Cardinals on. In January 2006, Urosa had already become Vice President of the Venezuelan Bishops' Conference.

He is the first Grand Prior of the Uruguayan Lieutenancy of the Order of the Knights of the Holy Sepulcher in Jerusalem .

On July 9, 2018, Pope Francis accepted his resignation due to reasons of age.

As Archbishop of Caracas, he was considered one of the most active critics of Venezuela's President Hugo Chávez , whose path to the “ Bolivarian Revolution ” he massively reprimanded, such as the withdrawal of the broadcasting license for the private broadcaster Radio Caracas TV. He also protested against a government-ordered ban on alcohol during Holy Week , since "there is nothing wrong with having a glass of wine with dinner in a restaurant", as well as against the comparison made by Chavez on the occasion of the Pope's visit to Brazil: he compared Christianization Latin America with the Holocaust , whereupon the archbishop asked the president to focus on everyday problems such as poverty and upbringing instead of looking into long-gone events. This open criticism of the head of state in Venezuela, who accused the church of conspiracy, made him popular across the country. The cardinal attracted attention because of his sharp criticism of Chavez's method of government, so he confirmed his allegations against President Hugo Chavez at a hearing in parliament: his government was striving for a communist dictatorship and had repeatedly violated the constitution.

Memberships in the Roman Curia

Jorge Liberato Cardinal Urosa Savino is a member of the following dicasteries of the Roman Curia :