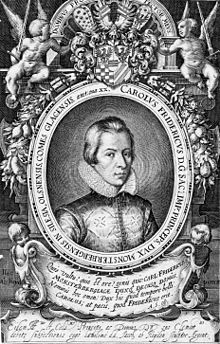 After the death of his father in 1617, Karl Friedrich took over the government of the Duchy of Oels . At the same time, together with his older brother Heinrich Wenzel , he inherited the Moravian dominions Sternberg and Jaispitz , which belonged to him after Heinrich Wenzel's death in 1639. On December 4, 1618, he married Anna Sophie von Sachsen-Altenburg (1598–1641).

In 1619 Karl Friedrich was at the head of an embassy which had been commissioned by the Silesian princes and estates to invite the newly elected Bohemian King Friedrich to an inaugural visit to Wroclaw in Prague . On the homage trip there, the king was welcomed in February 1620 by Karl Friedrich and his brother Heinrich Wenzel in their north Moravian town of Sternberg.

In order to defend the freedom of belief and out of the desire to exert political influence, Karl Friedrich joined an alliance ( conjunction ) on August 9, 1633, together with the dukes Johann Christian von Brieg and Georg Rudolf von Liegnitz and the council of the city of Wroclaw Protection of Saxony, Brandenburg and Sweden provided. As a result, Karl Friedrich and his allies lost the emperor's favor. After the Peace of Prague in 1635, they had to make atonement.

After the death of his brother Heinrich Wenzel in 1639, Karl Friedrich succeeded him as Duke of Bernstadt. In 1642 he married Sophie Magdalena (1624–1660), daughter of Duke Johann Christian von Brieg, for the second time.

Karl Friedrich was the last male descendant from the Münsterberg line of the Podiebrad in Oels. Through the marriage of his only daughter Elisabeth Maria to Silvius Nimrod , Oels and the Bohemian rule of Sternberg came to the House of Württemberg .