Giandara means "sharp stone" in the language of the native Aborigines . The historic gold rush town was built after 1859 when gold was found there and the place grew to several thousand inhabitants.

Kiandra is known as the first place in Australia to ski. The last resident left Kiandra in 1974 because the National Park and Wildlife Service demolished most of the city's buildings and integrated the site into Kosciuszko National Park .

In the abandoned gold rush area there are numerous mines and mining facilities, historical water pipes, buildings and an old cemetery.

When gold was found in a stream bed in 1859, 15 hotels and 30 shops were opened in Kiandra. A post office was opened in 1860, and in March 1860 more than 10,000 people were working in the gold fields around Kiandra. The largest nugget found in the Kiandra area weighed 9 kg. According to official information, 48,676 kg of gold had been mined by 1905.

During the Kiandra gold rush , printing presses were transported to the town, and from August 24 to December 28, 1860, nine issues of The Alpine Pioneer and Kiandra Advertiser appeared. When the gold rush ended in 1861, the newspaper ceased printing.

Numerous Chinese came to Kiandra from 1860 to 1925; of the 7,000 people in Kiandra in 1861, ten percent were Chinese. They came as gold diggers, but also as traders, butchers, bakers, tailors and doctors. Conflicts arose because, on the one hand, numerous Chinese were employed as porters , but were sometimes not paid or paid less than agreed, on the other hand, numerous Europeans were dependent on loans from the Chinese during the harsh winters. In 1861 numerous gold diggers left Kiandra to look for gold on the Lambing Flats . An anti-Chinese mood developed there for various reasons, such as the lack of water and because some Chinese were lucky as gold diggers. The Europeans attacked their camps in June and July 1861, burned their tents, attacked the Chinese and seriously injured some.

This anti-Chinese mood was also reflected in Kiandra in August 1861, when the Europeans again set fire to some of the Chinese tents, attacked the tent residents and drove them out of Kiandra. The Europeans drafted a petition that they addressed to the government of New South Wales, in which they asked them to restrict the influx of Chinese. In November 1861, the government passed a law regulating Chinese immigration. Any Chinese person entering New South Wales, a British colony, was required to pay a £ 10 tax. The Chinese gold diggers were forbidden to camp in Kiandra. However, they were allowed to work there or live in their own camps outside the city area. The Chinese population in Kiandra fell from 450 in 1861 to around 150 in 1872. During this time there were several acts of violence against Chinese people in New South Wales, but Kiandra remained peaceful. The anti-Chinese mood of the Europeans of that time later led to the so-called White Australia Policy, among other things . 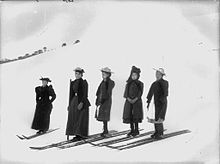 In the village of Kiandra, which is about 1400 meters high, there is snow in winter and the temperatures are quite low. The lowest temperature in Kiandra was measured in July 1965 at −17.8 ° C. The Chinese prospectors needed water to wash gold and in 1882 they dammed the Three Mile River with the Three Mile Dam on New Chum Hill . This lake, which still exists today and freezes over in winter, is used for winter sports and is located at the Selwyn Snowfields , where skiing is practiced.

The first ski competition in Australia was held in Kiandra, and in 1861 the world's first ski club was founded: In 1861, Norwegians came to Kiandra as gold diggers and went skiing there for the first time in winter.

The adventurer and writer Banjo Paterson was Vice President of the Ski Club of Australia and Billy Hughes , a Prime Minister of Australia, was also a member. In 1927 he was one of the first skiers to complete the multi-day ski tour from Kiandra to the Kosciusko Hotel .

There are poems and literature about the historical area, the snow and skiing, such as the poem about skiing The Demon Snow Shoes: A Legend of Kiandra by Barcroft Boake and a book by Klause Hueneke about the historical ski hike Kiandra to Kosciusko and by Norman W. Clarke the book Kiandra: gold fields to ski fields .

The ski area is no longer used today; instead the winter sports area of Selwyn Snowfields , which is not far from Kiandra.

Before European colonization , more than a thousand of the 25,000 or so Aborigines then living in New South Wales came to the Snowy Mountains when the Bogong butterflies were in the caterpillar stage . The caterpillars were an important source of food; they were roasted in ashes and hot sand and eaten in one piece.

The Aborigines were displaced by European settlement and in 1877 a government official saw an Aboriginal group in the goldfields of Kiandra who had become addicted to opium . The «last Aborigines of the Snowy Mountains» died in 1916 in the vicinity of Cooma.