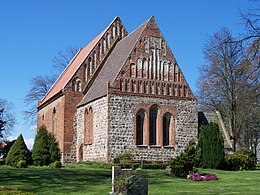 The Vorland church is a church building in the Vorland district of the West Pomeranian municipality of Splietsdorf .

The church was built in the second half of the 13th century and restored in 1887.

The retracted, square choir is made of field stone, the brick gable shows a cross and decorations over a German band . The choir has three windows in the east and twin windows with inlaid round bars in the north and south, it has a ribbed vault . The two-bay nave is made of brick and also has a ribbed vault. The buttresses are drawn inwards. The sacristy attached to the north of the choir also has a brick cross and panels and has a domed vault.

The furnishings include remains of wall paintings on the triumphal arch , an early Gothic baptismal font with a blind and a tombstone with the coat of arms of Hans Rekentin, who died in 1577. The pulpit , church stalls and the west gallery are neo-Gothic and were made in 1877. The altar dates from 1949 and was made by Max Uecker .

The organ of the church with 11 registers on two manuals and pedal comes from the workshop of Friedrich Albert Mehmel . It was restored in 1997 by Rainer Wolter from Zudar .

The bell of the church consists of three bells cast in 1920 and is located in a boarded-up bell house in the churchyard, west of the church.