Klein Himstedt is a district of the municipality of Söhlde in the Hildesheim district in Lower Saxony .

Starting in the north and following clockwise, Klein Himstedt is surrounded by the villages of Hoheneggelsen , Steinbrück , Groß Himstedt , Berel , Bettrum and Feldbergen . To the south-east of Klein Himstedt in the direction of Berel lies the Bereler Ries forest. Naturally, Klein Himstedt is located in the Ilseder Börde, which, depending on the definition, is often included in the Hildesheimer Börde . Accordingly, the village is extensively surrounded by agricultural land. In the south these areas are bounded by the wooded Salzgitter ridge (called Lichtenberge in the north) and the forewood . 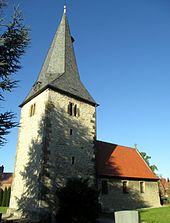 In 1451 the Saldern were enfeoffed with the tithe, a saddle yard and five Hufen land in Klein Himstedt by Bishop Magnus. In 1480 the property was taken over by the Steterburg monastery . In 1838 the tithe was abolished as a tax. It is mentioned that 20,000 thalers had to be paid to a von Hammerstein family.

On March 1, 1974, Klein Himstedt and the communities of Bettrum, Feldbergen, Groß Himstedt, Hoheneggelsen, Mölme, Nettlingen, Söhlde and Steinbrück formed the new community of Söhlde. From 1821 to 1866, these villages were already part of the Steinbrück office, while from 1885 to 1974 they belonged to the Marienburg district , which eventually became part of the Hildesheim district.

The church in Klein Himstedt has always been a daughter church of Groß Himstedt in the former Archdiaconate Nettlingen. It dates from the Romanesque period before 1300, which can be recognized by the towers. The bell from 1511 comes from the famous Hildesheim bell founder Harmen Koster. The symbol of the bell founder was included in the local coat of arms. In 1957 the west wall of the church tower and the south wall of the nave were renovated.

The coat of arms shows the gold-colored church bell of the village church with the master's mark of the bell caster on a red background.

The local council consists of five councilors and councilors. After the local elections on September 11, 2016 , the following distribution of seats resulted (changes to the 2011 election in brackets):

Klein Himstedt is connected to the surrounding villages of Bettrum, Groß Himstedt, Söhlde and Woltwiesche as well as to the federal road 444 via the state road 475 . In addition, the district road 217 connects the place with Hoheneggelsen.

The next train station is between Groß Himstedt and Hoheneggelsen on the Hildesheim – Braunschweig railway line .

Districts of the municipality of Söhlde