Bettrum is a district of the municipality of Söhlde in the Hildesheim district in Lower Saxony .

Beginning in the north and following clockwise, Bettrum is surrounded by the villages of Hoheneggelsen , Klein Himstedt , Berel , Nettlingen , Dingelbe and Feldbergen . The Vorholz ridge is south of Bettrums in the direction of Nettlingen . Bettrum is naturally located in the Ilseder Börde, which, depending on the definition, is often included in the Hildesheimer Börde . Accordingly, the village is extensively surrounded by agricultural land. 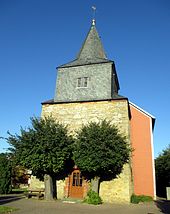 Bettrum is mentioned for the first time in an income register of the cathedral provost Johann from the years 1277 to 1286. There you can find the name en betten rum . Later the place was named Betthenem (1317), Bettenum (1325), Bettelem (1412) and Bettrem (1542). The origin of the place name is unclear. According to a local legend, a carpenter shouted "bed down" when the roof structure of the church was being built because of a crooked rafter. This explanation of the place name can also be found in the coat of arms.

On March 1, 1974, Bettrum and the communities Feldbergen, Groß Himstedt, Hoheneggelsen, Klein Himstedt, Mölme, Nettlingen, Söhlde and Steinbrück formed the new community of Söhlde. From 1821 to 1866, these villages were already part of the Steinbrück office , while from 1885 to 1974 they belonged to the Marienburg district , which eventually became part of the Hildesheim district.

Today's townscape is shaped by the Martinskirche, the village community center and the Heinrich Dammann youth barn.

The coat of arms shows a light brown rafter of the roof truss of the village church on a red background, including a rose that is reminiscent of the knight family von Saldern .

The local council consists of five councilors and councilors. After the local elections on September 11, 2016 , the following distribution of seats resulted (changes to the 2011 election in brackets):

The next train station is between Groß Himstedt and Hoheneggelsen on the Hildesheim – Braunschweig railway line .

Districts of the municipality of Söhlde