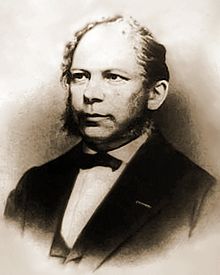 Title page of the text of the Codex Sinaiticus published in 1862, published under the auspices of Tsar Alexander II in Saint Petersburg ( Petropolis )

Lobegott Friedrich Konstantin von Tischendorf (born January 18, 1815 in Lengenfeld , † December 7, 1874 in Leipzig ) was a German Protestant theologian and manuscript researcher. He became more widely known as the discoverer of the Codex Sinaiticus , the oldest completely preserved manuscript of the New Testament.

Tischendorf was the son of a doctor who came from a paper mill dynasty and enjoyed his first school education in Lengenfeld. From 1829 he attended the grammar school in Plauen . From 1834 on he studied theology and philology at the University of Leipzig . This, he graduated in 1838 with a doctorate from and two years later was able to, also in Leipzig, habilitation .

After completing his habilitation, he became a private lecturer , but was rarely active as such, but went on several extensive study trips to France , Great Britain , Italy and the Middle East . In 1845 he returned to Leipzig and began to evaluate his research results. At the end of 1845 Tischendorf was appointed associate professor and in 1851 honorary professor. Eight years later he was entrusted with the ordinariate of theology and biblical palaeography .

As one of the most important researchers of the text history of the New Testament , he contributed significantly to a scientifically proven Bible text. Among other things, he deciphered the Codex Ephraemi Syri , discovered the Codex Sinaiticus and researched the Septuagint . In addition to the texts of Bible manuscripts, he also published other manuscript texts, including a number of Apocryphal writings .

On May 5, 1873, Tischendorf suffered a stroke from which he did not recover. He died at the age of sixty on December 7, 1874 in Leipzig. Caspar René Gregory continued his work , who brought out his last publications posthumously.

On the occasion of his 200th birthday in January 2015, Tischendorf's hometown Lengenfeld commemorated the manuscript researcher with a large exhibition put together by Tischendorf biographer Alexander Schick (Sylt). Around 3000 visitors saw the exhibition. The festival publication Tischendorf and the oldest Bible in the world were published for the anniversary . The mayor of Lengenfeld intends to rename the city to "Tischendorfstadt Lengenfeld".

Throughout his life, Tischendorf looked for old Bible manuscripts because he saw it as his task to provide the theologians with a Greek New Testament, the text of which was based on the oldest manuscripts. He wanted to get as close as possible to the original sources. Tischendorf made his greatest discovery in the St. Katharinen Monastery on the Sinai Peninsula , which he visited in May 1844 and again in 1853 and 1859 with financial support from the Russian Tsar.

In 1862, Tischendorf published the text of the Codex Sinaiticus found there for the 1000th anniversary of the Russian monarchy in a splendid four-volume facsimile edition and also an inexpensive text edition, so that every theologian should be able to study the text of this ancient Bible manuscript himself.

Shortly after the Codex Sinaiticus was discovered, Tischendorf came up with the idea of ​​donating the manuscript to Tsar Alexander II to the monks. This idea was received positively, but could not be carried out immediately because the newly elected archbishop of the monastery was not confirmed by the patriarch in Jerusalem. Since the dispute over the person of the archbishop could not be resolved, Tischendorf had the manuscript on loan from the monastery in September 1859 for the purpose of publication against a Russian voucher (issued by Prince Lobanow-Rostowski , the Russian ambassador in Constantinople) Signing a receipt. This “receipt” is still shown in St. Catherine's Monastery to this day and has been the subject of heated discussion for decades, with Tischendorf being accused of theft. However, the receipt says: "The manuscript has been entrusted to me under the condition that is laid down in the ... letter from Mr. Lobanow of September 10, 1859 (No. 510)". This Russian voucher was rediscovered in 2004 in the old tsar's archives. There it says: “... before the newly elected chief [archbishop] knows that he is recognized by the High Porte , Mr Tischendorf wishes to take the manuscript with him as a loan to St. Petersburg so that he can check his copy on the original while it is being printed. In support of Mr. Tischendorf's wish, I declare that if it is deemed possible to agree, this manuscript will remain the property of the Brotherhood of Mount Sinai until the ruler officially presents it on behalf of the Brotherhood of His Imperial Majesty ".

Only about 10 years later (1868) was a new archbishop elected, who was recognized by the Jerusalem Patriarch and who then made the donation. With this donation, Tischendorf's loan receipt became obsolete. The monastery correctly sent Prince Lobanov's certificate back to Moscow. They just forgot to enclose Tischendorf's "receipt". All documents relating to this matter (including the deed of gift) are published on the Internet with images.

Editions and text history of the NT

The edition of the Codex Ephraemi Syri rescriptus, produced with great effort, established Tischendorf's reputation as an editor of Bible manuscripts. It is a difficult to decipher palimpsest and at the same time an important biblical manuscript from the 5th century. One of his most important works is the 1869-1872 in two volumes published critical octave edition of the Greek text of the New Testament ( Editio octava critica maior ) accompanied by a critical apparatus with all text variants that he and his predecessors in manuscripts and Fathers had found .