Kunda is a town in the rural municipality of Viru-Nigula on the north coast of Estonia on the river of the same name . In the west there is a sandstone plateau (Maageranna).

It is one of the most important sites of the Middle Stone Age Kunda culture named after this place around 7000 BC. The site is located on the Hiiemägi hill east of today's city center on the Lammasmägi hill, which was an inland island at the time.

Kunda was first mentioned in a document in 1241 . It gained importance through the port built in the 19th century . Kunda received city rights in 1938.

Kunda was an independent municipality until the regional reform in 2017, since then it has belonged administratively to Viru-Nigula.

The city's coat of arms shows three harpoons of the fishermen of the Kunda culture in a stylized lake. 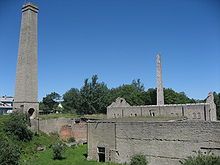 Cement has been produced in Kunda for over 100 years . There is also a pulp mill and a hydropower plant,

Kunda has a port that is important for its economy and has a guaranteed depth of up to 9.5 m. Cargo ships with a dead weight of up to 8000 tons can dock here. The most important cargo handled are wood , pulp and other wood products as well as cement and related materials.

Towns and municipalities in the Lääne-Viru district ( West-Wierland )