Royal Collegiate Chapter of St. Peter and Paul on Vyšehrad 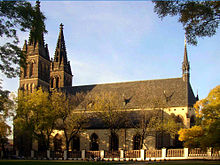 Collegiate Church of St. Peter and Paul from the south

The Royal Collegiate Chapter of St. Peter and Paul on the Vyšehrad in Prague ( Czech Republic ) (Czech: Bazilika svatého Petra a Pavla v Praze na Vyšehradě) was founded by the prince and Bohemian King Vratislav II in the second half of the 11th century . In order to limit the influence of his brother, the Prague bishop Jaromír-Gebehard , he obtained the exemption of the monastery from the Holy See , so that until 1763 the chapter was not subordinate to the Prague bishop, but to the Pope in Rome. The canons of the collegiate chapter were also allowed to wear a miter and pontifical shoes .

The generous equipment of the monastery with goods was later expanded. In particular, Vratislav's son Soběslav I had the collegiate church richly furnished and increased the number of canons to 17, making the chapter the most important in Bohemia. The canons and provosts were often advisors and chancellors of the Bohemian dukes. One of them was the provost and later Archbishop of Mainz , Peter von Aspelt , in the 14th century .

Tympanum on the main portal of the collegiate church

The collegiate church was built in 1079 in the Romanesque style of a five-nave basilica and rebuilt after a fire in 1249. In the 14th century, under Charles IV , it was redesigned Gothic with three naves and side chapels. In 1420 it was destroyed again by the Hussites . After the Hussite Wars were over by the Iglauer Kompaktaten , the monastery also revived, but without regaining its previous position.

In the 1720s it was rebuilt in the Baroque style based on designs by Giovanni Santini and under the construction management of Franz Maximilian Kaňka . In 1885 Josef Mocker began redesigning it in the neo-Gothic style, and from 1902 onwards the church received high pseudo-Gothic towers based on designs by František Mikeš . The relief on the main portal from 1901 comes from Štěpán Zálešák , who used the last dish as a motif. The interior of the cathedral received ornamental and figural wall paintings by the painter couple František and Maria Urban from 1902. On the left wall there is a Gothic view of Vyšehrad painted after 1420. In the presbytery there are frescoes by the Viennese painter Karl Jobst , which depict the life of the patrons Peter and Paul . The lead glass windows were designed by František Sequens . The main altar is decorated with depictions of the cathedral patrons and the Slav apostles Kyril and Method, designed by Josef Mocker and carved by Josef Hrubeš from 1884 to 1889 . Another altar by Jan Kastner's Czech patrons from the beginning of the 20th century is in the left chapel. In another altar of one of the chapels on the right is a valuable picture of the Virgin Mary, a Gothic painting from the collection of Emperors Charles IV and Rudolf II. In the first chapel on the right there is a Romanesque sarcophagus from the 12th century , probably a coffin of a member of the Premyslid family .

In 2003 the church was given the title of Basilica minor by Pope John Paul II .

The original Romanesque crypt , built as a cemetery church, served as the burial place of the first Bohemian king and his descendants. It has not yet been found in the previous archaeological investigations.

After the end of the communist persecution of the church , the chapter revived and since then has consisted of a provost, seven canons and three honorary canons.