The almost 24 kilometers long route leads from the city center of Lausanne through the northern suburbs and on to Echallens and Bercher in the Gros de Vaud , the Vaudois hinterland. The LEB is a modern suburban railway that runs partially underground in Lausanne. The trains run every 30 minutes (there are a few gaps between Echallens and Bercher in the morning). Every 15 minutes to Cheseaux is offered on weekdays . From Monday to Friday, several accelerated main traffic trains run in the direction of load. On Sundays in July and August, nostalgic steam trains run between Cheseaux-sur-Lausanne and Bercher . 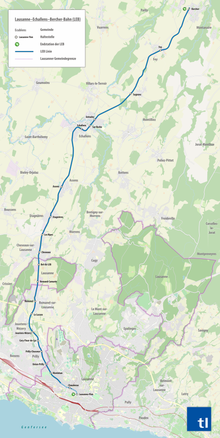 Route map of the LEB

The starting point is in the center of Lausanne at the Flon underground station ( 472  m above sea level ). The terminus of the Lausanne M1 light rail and a station of the Lausanne M2 subway of the Transports publics de la région Lausannoise are also located here . The LEB line runs 500 meters to the northwest in a double-lane tunnel to the Chauderon station, which is also underground, where the single-track section begins (there are a total of seven turnouts on the rest of the line). The tunnel ends after 988 meters and a more than 60 per thousand steep ramp follows to the surface to Avenue d'Echallens.

LEB passenger train with G2 steam locomotive No. 3 Talent , before 1910.

In 1871 the first application for a license was submitted for a line between Lausanne and Echallens . A kind of monorail was planned in which a single guide track was to be laid on the street. The trains would have been equipped with normal wheels like horse-drawn vehicles and would have reached a top speed of 19 km / h. However, the responsible federal office rejected the request because of technical deficiencies and the immaturity of the system. Instead, it prescribed a conventional narrow-gauge railway . Construction work on the “Chemin de fer Lausanne-Echallens” began in December 1872.

The line between Lausanne-Chauderon and Cheseaux-sur-Lausanne was opened on November 4, 1873. It was driven with steam locomotives. The rolling stock came from the recently decommissioned Mont Cenis mountain line between France and Italy , which had been replaced by a base tunnel . On June 1, 1874, the section between Cheseaux-sur-Lausanne and Echallens was opened. In the early years, a man had to run in front of the train on avenue d'Echallens in Lausanne and Prilly and warn passers-by of the approaching danger, with a flag during the day and a lantern at night. These employees were soon given the nickname “nègre fédéral” ( federal negro ), as this regulation had been drawn up by the Federal Railway Authority.

A second company, the Central Vaudois, opened the line between Echallens and Bercher on November 24, 1889 . But this company was far less successful than the “Chemin de fer Lausanne-Echallens” and soon ran into financial difficulties. The merger finally took place on January 1, 1913, and the LEB, which still exists today, was created. The entire line was electrified with direct current in 1936 . While on the self Trassee a voltage of 1500 volts was applied, was running for the street, tram-like section in the Avenue d'Echallens in Lausanne and Prilly a voltage of 650 volts applied. After the tram was discontinued in the city of Lausanne, the voltage was increased to 1500 volts along the entire route.

When it opened in 1873, it was planned to build the terminus in Lausanne near Flon in order to enable a change to the funicular to Ouchy . But then for 120 years they were content with a provisional terminus in the middle of the Place Chauderon. At the beginning of the 1990s, construction of the tunnel into the city center began. On May 28, 1995, the above-ground Chauderon terminus was replaced by a tunnel station. The tunnel was extended to Flon on May 28, 2000. Nowadays the LEB is operated by the Lausanner Verkehrsbetriebe TL .

A LEB train at Bercher station

In 2017, the Chemin de fer Lausanne-Echallens-Bercher (LEB) ordered 6 three-part Be 4/8 multiple units from Stadler in order to be able to implement a planned expansion of the range and to replace older rolling stock. Delivery of the Be 4/8 61 began in July 2019.

Another train was delivered in February 2020. On March 18, 2020, another vehicle was brought to western Switzerland.

The last train, Be 4/4 66, is temporarily parked behind Gossau SG station, probably due to a lack of space in the depot in Echallens.