Lev Sergeyevich Termen , later Leon Theremin ( Russian Лев Сергеевич Термен ., Scientific transliteration Lev Sergeevič terms ; emphasis: Lev Sergeyevich Termen * 15 . Jul / 27. August  1896 greg. In Saint Petersburg , † 3. November 1993 in Moscow ) was a Russian physicist and inventor. With the theremin named after him, he invented the first instrument that electronically generated sounds, and is therefore considered to be a pioneer for later inventions such as synthesizers and drum computers .

Leon Theremin came from a family of French and German descent. He had a sister named Helena. Theremin graduated from the Saint Petersburg Conservatory with a degree in cello and then studied physics at the university in his hometown. From 1919 he headed the physical-technical institute in Petrograd and from 1923 cooperated closely with the Moscow Institute for Musicology . In 1919/20 he invented the theremin in the laboratory for electrical vibrations. At that time he still called it the etherophone . Two years later the theremin was presented in Moscow. In March 1921 Theremin was invited to a private screening for Lenin in the Kremlin.

An arrangement similar to the theremin could be used to monitor valuable objects in museums and to control the proximity of entrances. Metal and mine detectors also work on the principle of the theremin. 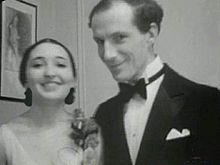 From 1927 Termen went on a world tour with the Theremin and delighted the audience with his "ghost music". In the course of this, Termen settled in New York in 1928 . Here he worked with Clara Rockmore , the most prominent theremin virtuoso. This contributed to the technical improvement of the instrument through various suggestions. The Theremin was patented in the USA and the production license was sold to RCA , who now manufactured the device. Terms Americanized his first name and called himself Leo (n) Theremin. Theremin set up a kind of science fiction studio in New York, where he used to impress wealthy sponsors and patrons with the latest "toys", which were revolutionary for the time. The pianist Rosalyn Tureck came into contact with Theremin in 1924 and later studied with him for a while. In 1931 she made her debut as a soloist at Carnegie Hall with a theremin instrument.

Return to the USSR

In 1938 Theremin returned to the Soviet Union under unexplained circumstances , where he was shortly arrested for anti-Soviet propaganda and sentenced to ten years in prison. First he came to Siberia in the gulag , later in an academy for captured scientists in Moscow , where he took part in the development of aircraft. After this group broke up, he dealt with his own developments while still in prison. He developed various bugs that u. a. in the official residence of US Ambassador George F. Kennan . After inventing one of the first bugs for the KGB , he received the Stalin Prize, First Class , in 1952 . He now had the opportunity to leave his prison, but preferred to continue working in familiar surroundings for the time being. After his release, he continued to work for the Soviet secret service.

It did not reappear until 1964 and was completely forgotten both outside and inside the Soviet Union. In his years in the clutches of the KGB, all of his titles and decorations had been stripped of him, and all documents confirming them had been destroyed. The physics institute in Saint Petersburg, where Theremin made his groundbreaking invention, claimed to never have had such a staff member back in the 1990s. In 1964 Theremin became director of the acoustic research department at the Moscow Conservatory. Four years later he was transferred to the Faculty of Physics at Moscow University . In the mid-1960s he began working again with engineers and musicians in the electronic music studio of the Scriabin Museum to develop new electronic instruments and to further develop his old instruments.

At the same time, Theremin began to work in the acoustics laboratory of the Moscow Conservatory . In addition to his acoustic work, he built further developed variants of the theremin, several terpsitones , and an electronic cello. His work received some attention until 1967, when Harold C. Schonberg became aware of and met Theremin. Schonberg wrote about this meeting in the New York Times , which in turn prompted the Moscow Conservatory Director to dismiss Theremin from the Conservatory.

Theremin then began to work as a mechanic for the physics faculty of Moscow State University. He developed further theremin prototypes, but they were lost again.

For a long time, the prevailing opinion in western countries was that he had died in 1938. He seemed to have practically disappeared from history for a long time.

In the early 1990s he received international awards and demonstrated his theremin on various trips.

The first two marriages with Ekaterina Konstantinowa and Lavinia Williams remained childless. With Maria Guschina he had the daughters Natalija and Jelena Theremin. His granddaughters are Mary Thurman and Olga Theremin, the mother of Peter Theremin .

The American jazz quartet Mostly Other People Do the Killing is named after a quote from Leon Theremin, who said in an interview that Stalin wasn't such a bad guy because other people usually did the killing.