Libelle class was the name for a class of small torpedo speed boats (KTS) of the People's Navy of the GDR with the project number 131.400. 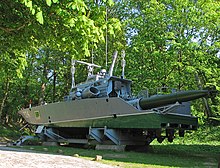 Project 131 with torpedo in the Danish Naval Museum

At the beginning of the 1970s, the development of a modern torpedo speedboat began at the Institute for Shipbuilding in Wolgast . Four prototypes were tested between 1971 and 1974 before delivery to the Volksmarine began in 1974 . All 30 series boats were built at the shipyard in Rechlin , the final equipment was carried out by the Peene shipyard.

The main armament of the class were two 533 mm torpedo tubes , which were permanently installed parallel to the keel and could not be reloaded with on-board equipment. During the attack, the torpedoes , rather atypical, were dropped aft in order to then follow the course of the launching boat. As a rule, these were steam-powered torpedoes 53-39 PM of the Soviet design. A double-barreled 23 mm gun was installed at the stern for anti-aircraft defense .

The discharge tubes for sea mines were removable so that, for example, combat swimmers could be set down over the sides.

There are no more speedboats of this type in use.

Four museum boats still exist: 924 in the Danish Navy Museum , 925 in the International Maritime Museum Hamburg , since June 24, 2008 in the Rechlin Aviation Museum , 952 in the German Naval Museum in Wilhelmshaven and 961 in the Military History Museum of the Bundeswehr in Dresden.