Billboard at the town hall in Plauen

The Central German Uprising , also known as the March Action , in March 1921 was an armed workers' revolt unleashed by the KPD , KAPD and other radical left forces in the industrial region around Halle , Leuna , Merseburg and in the Mansfeld region . The action ended with the defeat of the insurgents, which contributed to a temporary weakening of the communist party.

Within the VKPD (i.e. the amalgamation of the KPD and left-wing parts of the USPD ), the party leadership around Paul Levi fell in February 1921 . Karl Radek played a central role as an envoy of the Executive Committee of the Communist International (EKKI). Representatives of the previous left opposition took his place. Heinrich Brandler and Walter Stoecker became chairmen .

This change in leadership within the VKPD was a central requirement for the Central German uprising. At the beginning of March, delegates from the EKKI, led by Béla Kun , promoted revolutionary action in Berlin. This proposal was willingly taken up by the new left party leadership. Both sides developed the concept of an attempted insurrection in the industrial areas in central Germany for the end of March. It was clear to those involved that this would not lead to a communist takeover. They hoped for a weakening of the bourgeois republic and the overthrow of the government of Constantin Fehrenbach . The slogan should be: "For the alliance with Soviet Russia and the overthrow of the government."

The concentration of the action on Central Germany resulted from the strength of the VKPD in this area. In the Halle-Merseburg area alone, the VKPD had 67,000 members. In the elections to the Prussian state parliament on February 20, 1921, the VKPD received almost 200,000 votes. The (remaining) USPD and the VSPD only received around 70,000 votes each. However, this area was not a communist stronghold before the unification of the USPD and KPD. The left wing of the USPD was particularly strong there, and it had only just passed almost completely to the VKPD.

Bourgeois circles, as well as the SPD chief president of the region Otto Hörsing, feared a communist takeover of power in this important industrial region. On March 17, 1921, Hörsing announced that it would send units of the newly organized Prussian police to the central German industrial area. There were absolutely factual reasons for this. The area had n't really settled down since the Kapp Putsch . There were wildcat strikes and looting. In addition, many weapons were still in the hands of radical workers. But the police operation was primarily a preventive action. In particular, the Prussian Minister of the Interior, Carl Severing, was of the opinion on the basis of evidence that a major communist action was imminent in Central Germany. The mission began on March 19th.

The news of the impending police invasion led the VKPD headquarters to change the schedule for the uprising. It was decided to start the uprising on March 17th. The police operation was not the trigger for the uprising, but only led to the start of the uprising being brought forward.

Railway assassination during the March fighting 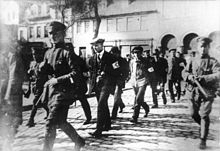 Revolutionary workers are led away by the police in Eisleben

The press of the VKPD was very revolutionary from March 17th. Béla Kun issued the slogan: “The weapon makes the decision. - And the counter-revolution does not want to give up its arms. (...) Every worker doesn't care about the law and buys a weapon wherever he can find it. "

The call initially met with a cautious response. The call for a general strike by the VKPD district leadership on March 21 was only obeyed in the nearby Mansfeld district. The entire Mansfeld - Eisleben mining area was only on strike the following day . The chemical plant in Leuna formed a focal point .

The central figure of the uprising was Max Hoelz . This did not belong to the VKPD, but to the KAPD . Hoelz arrived at the industrial area in Mansfeld on March 22nd. He armed workers and the unemployed and covered the region around Mansfeld, Eisleben and Hettstedt with arson, looting, bank robbery and explosives as well as train derailments and the detonation of railway lines. There were bombings against the judicial buildings in Dresden , Leipzig and Freiberg . The military-political apparatus around Hugo Eberlein also played a part in this. Insurgent workers barricaded themselves on the premises of the Leuna Works .

On March 23, 1921, the violent clashes between the insurgents and the police began. On March 24, Reich President Friedrich Ebert (SPD) declared a state of emergency under Article 48 of the Weimar Constitution for the province of Saxony and Greater Hamburg (including the parts that belong to Prussia, see Greater Hamburg Act ).

On the same day, the VKPD called a general strike throughout the Reich, which was only followed in Lusatia , parts of the Ruhr area and Thuringia, as well as in Hamburg. Most of the time, only regions took part in which there was independent conflict potential. In Central Germany it was the protest against the occupation by the police. In Central Germany in particular, the VKPD members saw the action as a legitimate defensive reaction similar to the general strike against the failed counterrevolutionary Kapp Putsch of March 13, 1920 against the Weimar Republic created after the November Revolution . In the rest of the Reich this reason was missing, and the supporters of the VKPD did not heed the call for a general strike. In Hamburg shipyard occupations failed because of the state of emergency, but also because of the resistance of the workforce.

In the central German industrial area, after the presidential ordinance became known, the fighting intensified and now also spread to Halle , Merseburg and Bitterfeld . However, the strikers from the ranks of the VKPD and KAPD kept to themselves. Support from supporters of the USPD or even the VSPD was almost entirely absent.

On March 29, the uprising had largely been decided militarily. The government troops prevailed and put down the uprisings. The occupation of the Leuna-Werke was ended with artillery fire and the storming of the factory premises. On April 1, 1921, the last group of rebels led by Max Hoelz was broken up near Beesenstedt . Hoelz was initially able to escape and was arrested two weeks later in Berlin.

On April 1, the headquarters of the VKPD declared the general strike, which was not followed for the whole of Germany, to be over.

A total of around 200,000 workers across the Reich took part in the strike. Around 180 people were killed in the fighting. 35 of them were police officers. The number of wounded is unknown. Around 6,000 people involved were arrested as coup suspects. 4,000 of them were sentenced to a total of 2,000 years in prison. Eight were sentenced to life imprisonment and four to death.

The action was a complete failure for the VKPD. The uprising had also been inadequately prepared because it had been brought forward. This also made it possible for Max Hoelz and the KAPD to become the most important actors in the uprising area. But from the outset there was also a lack of convincing goal for many workers. The former VKPD chairman Levi pointed out that the first initiative for action came from the Communist International.

Within the VKPD, the “March Action” and the “offensive theory” on which it is based triggered violent internal party disputes, which led to the resignation or exclusion of many members, including the majority of Reichstag members and the two former co-chairmen Paul Levi and Ernst Däumig . The latter accused the party majority and the Comintern leadership around Grigory Zinoviev "putschism" and founded the Communist Working Group (KAG), which joined the USPD in the spring of 1922.

The VKPD as a whole lost considerable political clout due to the defeat. If the party had a support base of 450,000 members after unification with the USPD, the number fell to 150,000 after the March campaign.

The Institute for Marxism-Leninism at the Central Committee of the SED recognized that the March fights were poorly prepared and had been abused by “ultra-left” forces, but saw them essentially as a defensive measure provoked by the state and imposed on the proletariat. A previous uprising plan by the VKPD was denied. Ossip K. Flechtheim spoke of communist uprising plans, the outbreak of which the Prussian government anticipated. From the point of view of German historical studies, Hans-Ulrich Wehler comes to a harsh judgment. According to this, the uprising was “by no means one of the mystified spontaneous mass uprisings of the industrial proletariat, but an attempt at overthrowing controlled by the Moscow Comintern headquarters, which was based on a blatant misjudgment about the revolutionary potential in Germany, so that it was at the expense of the relatively small number misguided actors failed miserably. ” Heinrich August Winkler comes to a similar conclusion . He too sees no proletarian mass uprising in the March action, but rather an attempt at overthrowing the Comintern and its German partisans staged from above.

"Many fell at Leuna, yes, at Leuna, workers 'blood flowed ..." is (in the usage of the former GDR) a folkloric workers' song. The evidence for this type of song has existed in variants since before 1924 and is detailed in Wolfgang Steinitz's book German folk songs of a democratic character from six centuries (Volume 2, Akademie-Verlag, Berlin 1962, No. 280, pp. 423-472) Comment and many notes are documented. The text variants use numerous new localizations that are adapted to the respective events (for example: "In Remscheid many fell ...", 1924, "In Eisleben there are many communists ...", 1925 etc.). Steinitz has been using melodies for this since 1933 (and these are based on a song "The sun sank in the west ...", which became very popular as a soldier's song since the 1870s). There are also special song types that use the text model, such as B. “Many fell near Wesel…”, 1927. The text model was also used after 1945, and in the GDR “the process of the gradual transformation of a sentimental soldier's song […] a revolutionary workers' song” was created. The Leuna song is based on an older song that refers to the First World War with variants such as “In France many stayed ...” and “In Flanders there are many soldiers ...”. The Leuna song was "the most popular German revolutionary workers' folk song of the Weimar period". A workers' song, according to Steinitz, uses the model of the folk song as a political agitation song, and because of its temporary popularity it can be called a folk song in the broader sense. The so-called workers' folk song was a focus of GDR folk song research. B. several publications by Inge Lammel and Hermann Strobach since the 1970s.