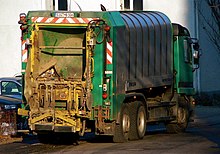 With garbage disposal or Swiss Kehrichtabfuhr is generally referred to the elimination of waste by using special vehicles in urban or municipal director.

The vehicles used for garbage collection ( garbage trucks ) must be marked with an A-sign in Germany .

The history of garbage collection begins with the fact that in the 15th century it no longer seemed acceptable to dump household and commercial waste and even human excrement on streets or in city streams. Since then, the waste from the cities has been brought to the surrounding fields. How badly this must have worked is shown by the complaint made by the Cologne City Council in 1579, “that the residents keep it very unclean and unclean in front of their houses and inheritances”. Until well into the 20th century, garbage disposal mostly transported garbage to garbage dumps .

The first waste incineration plant was built in Nottingham ( United Kingdom of Great Britain and Ireland ) in 1874 based on a patent from Albert Fryer. In 1896, after the cholera epidemic of 1892, Hamburg became the first German city. At the beginning of the 20th century, the motorization of the vehicle fleet (see also automobile ) began, first with battery-powered pre-tensioning cars and later through the use of vehicles with combustion engines .

Today the use of microprocessor-assisted garbage collection processes is being discussed in order to be able to carry out the emptying as required and thus to save costs. The term Dustbot covers several different robots under development that can remove rubbish completely independently.

The first waste glass containers appeared in Germany at the end of the 1970s, then waste paper containers in the mid-1980s and, from the 1990s, garbage cans for packaging waste marked with the green dot and the organic waste bin for compostable waste. The garbage collection differentiated more and more the garbage in an effort to correspond to the recycling idea of ​​the emerging environmental protection movement.

The entire area to be traveled is divided into individual collection districts, which are approached according to the collection plan. Which is at the respective days household waste by the households in garbage bags , partially deposited in designated tons, front of the house. In Switzerland, a bag fee must be paid for these garbage bags . The household rubbish bins can be emptied biweekly, weekly or more frequently if desired. Since the regular garbage truck is unsuitable for the transport of bulky waste because of its emptying , or the bulky waste is disposed of or charged separately, it must be picked up separately. In spring and autumn, green waste such as tree and shrub cuttings can be collected and composted by the garbage disposal in rural areas. Often the respective disposal company also offers the collection of Christmas trees. Garbage collectors have to wear safety vests during their work in Germany in order to increase their own safety.

Recyclable materials ( waste paper , waste glass and packaging ) are usually transported by private garbage disposal. Since there are mostly special bins here, you need garbage trucks that are not compatible with the household waste bin system. Here are front loading and rear loaders in use, but also specialized garbage trucks .

Regularly occurring problems are the heavily parked or overgrown streets, where not only refuse collection, but also emergency services often reach their limits. One approach is such. B. in Barcelona, ​​in narrow streets, the only night or early morning collection of garbage. In Winterthur , Switzerland - especially in the city center - a refuse collection truck with a quiet hybrid drive has been in operation since 2013 .

After the rubbish has been collected, it is processed further: the valuable rubbish such as waste paper and waste glass is processed in specialized companies and for the most part flows back into the production of new goods. For hygienic reasons, however, food packaging may not be made from it. The household waste is in Germany (since 31 May 2005), in Austria (since 31 December 2004 and 31 December 2008) and Switzerland (mostly since January 1, 2000) in a waste incineration plant , mechanical-biological plant or in other countries untreated to the landfill .

The garbage collection is usually operated as a garbage collection association for rural communities, as a municipal company or as a company owned by the municipality. More and more often, the collection services are also awarded to a private company through a tender, which then collects the waste on behalf of the municipalities. But many commercial enterprises also employ separate waste disposal companies to collect the various types of waste. It is possible that the same type of waste is collected by different companies several times a week in a waste disposal area.

Politicians have been discussing the privatization of garbage disposal since the mid-1970s . As a rule, this only leads to a change in the legal form of the garbage disposal company with the same communal owner. Due to the public procurement law that has been in force for several years, the operators of municipal waste collection are required to use the most economically advantageous provider for the incineration of household waste. This leads to so-called garbage tourism , which is ecologically hardly justifiable , as the contents of the vehicles often cannot be disposed of in the nearest facility.

The people who dispose of the garbage are called garbage collectors, garbage trucks, garbage drivers or garbage collectors. In the past, no training was required for this, and so-called guest workers were often employed at low wages from the 1960s until the apprenticeship as supplier and disposal worker was created in 1984 .

Today the garbage collector is regarded as an apprenticeship in the waste management industry. Since June 17, 2002 , the specialist for recycling and waste management has been a state-recognized training occupation in Germany under the Vocational Training Act.