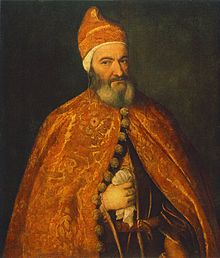 The family has been on record in Venice since 1117, they belonged to the new families ( case nuove ). Marcantonio nevertheless belonged to a branch of the Trevisan that was only accepted into the Venetian nobility in 1381 - unlike, for example, the captain general Marchiò Trevisan, who had brought a holy blood relic from Constantinople in 1429, which was venerated in the Frari Church . A great uncle of Marcantonio was the Patriarch of Aquileja Alvise Trevisan.

Trevisan, the oldest of five brothers, held important offices in the service of the republic. He was governor of Cyprus and Candia ( Crete ) and procurator ( procuratore de ultra ).

Trevisan was an extremely benevolent and pious person. This was evident - in addition to his commitment to the legal system and religion - also in his efforts to ban bad manners such as the popular nightly balls, theater performances and celebrations after midnight and to limit the lavish life of the nobility. His efforts to reform religious life and speed up the process of justice have not been successful, but he has been valued for his piety and integrity. Marcantonio Trevisan only served as doge for a year.

His tomb is in the Church of San Francesco della Vigna . It is a floor tomb that may have been made to a design by Sansovino .