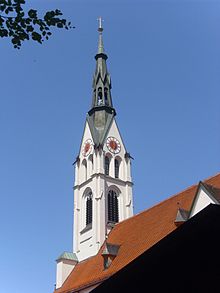 The parish church Maria Himmelfahrt is located in the center of Bad Tölz . It is a defining structure in the Tölz townscape and the oldest existing structure in the Isarwinkel . The patronage of the Church is celebrated on August 15th, the feast of the Assumption of Our Lady . Tölz's oldest cemetery was located around the church until 1615. Some of these tombstones are now embedded in the outer wall of the church.

The first documented mention of this church goes back to the year 1262: There is talk of a castle chapel, which was probably also used by the citizens of the market. The trade route leading through Tölz, the Salt Road , increased the importance of the market and, as a result, the expansion of the existing chapel, which from the beginning of the 15th century is known as the "Church of Our Lady of Tölz".

In a fire in 1453, the Tölz market, including the castle and church, was almost completely destroyed. The reconstruction of the church, which was now built as a late Gothic three-aisled hall church , took place from 1454. In the course of the 16th century, the church was equipped with a magnificent glass window by a ducal foundation. In the competition with the duke for the equipment of the church, the keepers of the market also took part. The best-known family of keepers were the winemakers; they had a side chapel added to the left of the choir in 1513, which served as a burial place. The most famous representative of this family of carers from Tölz, Kaspar Winzerer , was also buried there. A red marble tablet still reminds of him today.

An early baroque high altar was purchased before the Thirty Years' War. It was carved in 1611 by the Weilheim sculptor Bartholomäus Steinle and contained the Virgin Mary in a halo raised to heaven. This carving hangs in the choir arch today. It is shown in the coat of arms and in the seal of the parish of the Assumption of Mary in Bad Tölz. During the plague of 1634, the veneration of the plague saint Sebastian also gained importance in the Tölz market. In his honor an altar was set up in the right choir chapel (Sebastianikapelle). The altar was removed in the 19th century, but the altarpiece by Johann Ulrich Loth was preserved. It has been hanging in the chapel again since the last restoration.

In 1866 the early baroque altar was replaced by a new high altar designed by Georg Schneider. When closed, it shows the Assumption of Mary into heaven (Ascension). With the wings open, the altar shrine becomes the annual nativity scene. From Advent to Corpus Christi, figures by Franz Anton Fröhlich (who also worked on Calvary ) alternately show more than 20 biblical scenes in front of Simon Quaglio's backdrop .

The left choir chapel (Maria-Hilf-Kapelle) is the patron saint of the church, St. Mary, consecrated. A copy of the Innsbruck Maria Hilf picture by Lukas Cranach the Elder is displayed here on the new convertible altar (2011) as a picture of grace . Ä. revered. In accordance with the liturgical calendar, a late Gothic Pietà is sometimes brought into focus instead.

After the devastating city fire of 1453, the late Gothic hall church received the gabled roof tower that was distinctive for centuries and was attached to the remaining tower stump, probably only as a temporary measure. After the discovery of iodine sources in the middle of the 19th century and the subsequent blossoming into a health resort, a bourgeois pride and a new aesthetic feeling awoke in Tölzern. In 1873 the Tölzer official and weekly newspaper spoke of the “stunted shape” of the church tower and asked whether Tölz “should lag behind some village communities”? Twenty years earlier, Johann Nepomuk Sepp designed a cathedral-like, neo-Gothic tower for the church. From 1875 to 1877 the church was redesigned in a neo-Gothic style according to plans by the Haidhai master builder Michael Steinbrecher . The new tower was twenty meters higher and had flying buttresses , tracery windows , eyelashes , pinnacles , gargoyles and significantly changed the appearance of Tölz. An extensive interior renovation was carried out in 1906 by the Munich architect Joseph Elsner . Until 1937, the last two towers in Tölzer did their duty in the church tower.

Structural defects and weathering of the pillars and ornaments meant that the tower had to be extensively renovated in the 1970s. Various components of the stone crusher tower, such as finials, pinnacles or side turrets, had already been removed for safety reasons. In October 1976, the Munich church architect Enno Burmeister presented a renovation concept with three possible variants: Reconstruction of the Steinbrecher Tower from 1877, reduction of the neo-Gothic tower to its basic shape with a closed hood or restoration of the low saddle roof, including the demolition of all decorative elements.

For weeks there was a heated discussion about the future of the tower. The historian Josef Katzameyer from the historical association referred to the "very clumsy and massive" shape of the former saddle tower, as well as that the "current tower has long since become a monument of the neo-Gothic". Karl Floßmann, also from the Historical Association, called the existing tower with "its splendidly structured, openwork spire" a "symbol of the city". The possible “stripped down” version of the neo-Gothic tower was reviled as a “tin cone”, as a “hideous and tasteless” construction. Some advocated the old gable roof tower as an “unusual, courageous solution”. To “resurrect a centuries-old image” is “fascinating”, also because Tölz no longer needs to define himself by the height of the church tower. Paul Ernst Rattelmüller , district administrator for Upper Bavaria, called the planning for the saddle tower a “ shield bourgeois prank ”: “That would mean tearing down a tower that has become historic in its substance in order to reconstruct an older historical condition, one could also say to fake it. “He did not understand“ how to destroy one of the few neo-Gothic towers in our country ”.

City pastor Rupert Berger spoke out in favor of the saddle tower, which was cheaper to maintain, as one should not spend unnecessary money on jewelry and ornaments. The parish council finally rejected the reconstruction of the tower from 1877, also for reasons of cost. The majority voted in favor of a compromise solution consisting of the 1877 tower and "sheet metal tenons". The spire with its openings should be preserved and decorations should only be attached if these remained within the financial framework.

From 2006 onwards, extensive refurbishment and renovation measures were carried out, above all a paving of the subsoil had become necessary, as the church is on too soft a subsoil. This problem occurred in earlier times, which is why renovation work had to be carried out repeatedly since 1637. During the excavations that were carried out in the course of stabilizing the subsoil, the remains of the previous church from the early 13th century were found in 2007, a late Romanesque building with spoilage . During test drilling in September 2007, construction workers also came across a "sword grave". According to the archaeologist Stephan Möslein, this seems extraordinary, since burials with weapons in churches are rare. Further skeleton finds brought the remains of three 50 to 60 year old men to light, Möslein suspecting that these were the winemakers, as these skeletons must have been buried around 1500. In addition to a woman's skeleton, a grave with two children, probably siblings, from the 17th century was also found. According to the archdiocese, all of the skeletons remained in place.

The church was rededicated in June 2011 by the Archbishop of Munich, Cardinal Reinhard Marx . At the same time he consecrated the new “People's Altar of the Twelve Apostles”. After the renovation of the interior, an external redesign followed, which was completed in 2014. The clock faces and neo-Gothic pointed arches have been restored. The most obvious change is the new painting of the church in a gray-beige color. This should be based more on the neo-Gothic style of the church in the 19th century. Claus Janßen, the chairman of the association for the renovation of the parish church, said that the church was “now much more grounded than before”. The previous yellow, rather baroque-looking color of the church is not a historical color, but "a creation of the 1970s". 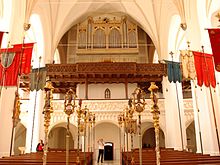 The organ was built in 1978 by the organ builder Georg Jann (Allkofen). The slider chests -instrument has 37 registers on three manuals and pedal . The game actions are operated mechanically and the stop actions electrically.