Mark Davis was able to qualify for the first time in 1994 for the snooker world championship, he lost in round one against Terry Griffiths . In 1995 he defeated Ken Doherty in the first round of the World Cup and was then eliminated by Peter Ebdon . In 1997 he qualified again for the World Cup and this time lost his first round match against Ken Doherty. In the late 1990s he almost lost his status as a Main Tour player . In 2001 he reached the quarter-finals of the Regal Scottish Open and thus secured himself to remain on the Main Tour. At the 2001 World Snooker Championships he lost his first round match against Stephen Hendry .

In 2008 he was able to qualify for the World Championship again after victories over Leo Fernandez (10: 9) and Gerard Greene (10: 2). However , he lost his first round game against Mark Williams 3:10. At the Northern Ireland Trophy 2008 he came with wins over Joe Swail and Ding Junhui in the round of 16, where he was eliminated by Ali Carter .

In 2009 he won the final of the first 6 Red Snooker World Championship 6-3 against Mark Williams . 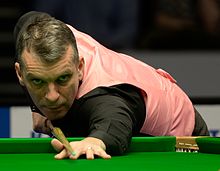 In the 2013/14 season , he won the 6-Red World Championship again in September , again with an 8: 4 in the final, this time against world number one Neil Robertson . Just a week later he won another tournament in Hong Kong : He defeated Robertson again in the final of the General Cup , this time 7-2.

In the 2017 Group 4 Final of the Championship League , Mark Davis made the first maximum break of his career. At 44 years and 151 days, he was the oldest player to ever have achieved a 147 in competition. Only 51 days later he played the second maximum of his career in the final round of the Championship League. Now 44 years and 202 days old, he improved his own record. He is also the first professional to have played two maximum breaks in a tournament.

At the English Open 2018 he reached the finals of a full world ranking tournament for the first time in his career. But he lost this 7: 9 against Stuart Bingham .

In 2019 he qualified again for wins over Lü Haotian , Fergal O'Brien and Rod Lawler after a three-year break for the World Cup and, at 46, was the oldest player in the finals.