Shaun Murphy (born August 10, 1982 in Harlow ) is an English snooker player from Nottingham . He became world snooker champion in 2005 .

Shaun Murphy ( nicknamed "Whiston Warrior", "The Magician") became a professional snooker in 1998. After the 2001/02 season he received the World Snooker Newcomer of the Year and YPD of the Year awards after winning the Benson & Hedges Championship in 2000 , which secured him participation in the Masters in London .

In 2005 he surprisingly won the World Snooker Championship in Sheffield . At that time he was only 48th in the snooker world rankings and first had to fight for a place in the World Cup finals in qualifying. Murphy beat Matthew Stevens in the final with 18:16 frames . He was only the second snooker player after Terry Griffiths in 1979 to win the world title as an unset player. With this win, Murphy moved up to 21st place in the official world rankings after the end of the season.

At the 2007 Malta Cup , Murphy won the final on February 4, 2007 against Ryan Day 9: 4. While preparing for the 2007 World Cup , he lost 18 kg in body weight. At this World Cup he made it to the semi-finals and thus collected enough points to take third place in the world rankings.

At the Pot Black Cup of the 2007/2008 season he was defeated in the final Ken Doherty ; in February 2008 he was able to defend his title at the Malta Cup with a victory over the same opponent. However, both tournaments were not ranked tournaments. Due to his constant performance during the season with several semi-finals and the move into the finals of the China Open , in which he was defeated by Stephen Maguire by 9:10 frames, he was then able to collect enough points to be the leader in the provisional rankings at the world championship to participate. However, he was defeated there in the second round to the later finalist Allister Carter , which is why he slipped back to 3rd place in the official world rankings.

After he started the 2008/09 season with moderate success and was eliminated in the first round of several Main Tour tournaments, he made it into the final of the UK Championship and finally a contested 10: 9 final win over Marco Fu . He was the tenth player to win the two most important snooker tournaments with the World Championship and the UK Championship. Despite a cold that had caused him problems beforehand, he reached the final of the 2009 World Snooker Championship . With 9:18 he was clearly defeated by John Higgins , who had gained a big lead in the second session.

The 2010/11 season began for Murphy with a win at the Wuxi Classic . He collected world ranking points at the Players Tour Championship , a new series of minor ranking tournaments introduced this season. At the Bruges Open 2010 he won the final against Matthew Couch . He also made it to the finals at the Ruhr Championship in Hamm , but lost to John Higgins there. He also qualified for the final of the series in Dublin in March 2011 and won the Grand Finals with a final win over Martin Gould 4-0. At the Snooker World Championship in 2011 he came with his 10-1 win over Marcus Campbell in the round of 16, which he lost 10:13 to Ronnie O'Sullivan . 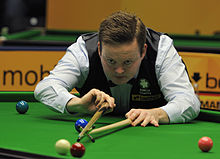 At the beginning of the 2012/13 season he lost the final of the 6-Red World Championship 2012 against Mark Davis 4-8. At the end of the season he was inducted into the Snooker Hall of Fame .

In January 2014 Murphy achieved his second official maximum break in Group 2 of the Championship League 2014. In February 2014 he won the Gdynia Open as part of the Players Tour Championship 2013/14 , where he also had another maximum in his round of 16 match against Jamie Jones Break played. A month later, he won his fifth ranking tournament, the 2014 Haikou World Open .

At the beginning of October 2014 he won the Bulgarian Open with a 4-2 final victory over his compatriot Martin Gould . It was his third title in a PTC tournament. Two weeks later he reached the final at the General Cup in Hong Kong , which he lost 6-7 to Allister Carter . In November he won the Ruhr Open with a 4-0 final win over Robert Milkins . He managed the fourth maximum break in his career in the second frame of the final . 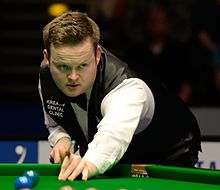 In the second qualifying round for the European Masters 2016 , Murphy played his fifth maximum break. Only four players had scored more 147 breaks in their professional careers at this point.

With the final victory at the Gibraltar Open over Judd Trump (4: 2), he secured his first rankings title of the 2016/17 season.

In the 2017/18 season Murphy was able to stay in the top 10 of the world rankings . At the China Championship 2017 , Murphy lost after victories, among others. over Anthony Hamilton , Stephen Maguire , Zhou Yuelong and Ali Carter with 5:10 in the final against Luca Brecel . At the following Paul Hunter Classic 2017 , Murphy also made it to the final, but lost again, this time 2: 4 against Michael White . Murphy also made it to the final at the UK Championship 2017 . But he lost again, that time with 5:10 to Ronnie O'Sullivan . This phase of the final defeats continued at the Players Championship 2018 with a 4:10 against O'Sullivan.

At the 2018 Snooker World Championship , Murphy surprisingly lost in the first round with 9:10 to Jamie Jones . After a time with below average results, Murphy reached the final of the 2021 World Snooker Championship , but lost to Mark Selby .

Murphy's great strength is match play. He sinks extremely difficult balls and is therefore able to save a “stuck” situation in which for many other players only safety, i.e. a controlled exit, would be an option. Murphy uses the smallest chance of the first point after the frame has opened and is not infrequently able to stay at the table until the frame is decided in his favor.

His willingness to take risks is also an opportunity for his opponent. If he does not sink the targeted long ball, he often leaves an open table and with it all possibilities for the opponent. His skills in tactical play were by no means among the best in the scene at first. After his World Cup victory in 2005 , he gradually reduced these deficits.

With 149 minutes he held the record for the fastest World Cup game, until it was trumped at the 2020 Snooker World Championship by Ronnie O'Sullivan with his 10-1 victory over Thepchaiya Un-Nooh with just 108 minutes.