The World Professional Billiards and Snooker Association ( WPBSA for short ) is the world association for professional players in the snooker and English billiards variants .

The WPBSA emerged from the Billiards Association and Control Council Club , later just Council , abbreviated BA&CC or BACC (more commonly). The BACC set official rules for the sport of snooker for the first time in 1919 and hosted the world championships from 1927 (first World Cup) to 1952.

The association was founded in 1968, at that time still under the name Professional Billiard Players Association . The main task of the WPBSA is the marketing and organization of the Snooker Main Tour . This includes both the world ranking tournaments and invitation tournaments such as the Masters . The WPBSA also holds the worldwide marketing rights for the sport and takes care of sponsorship contracts and the allocation of television broadcasting rights. The association also has sovereignty over the generally applicable rules of snooker sport . The WPBSA is also responsible for formulating the official rules.

In addition to its headquarters in Bristol, the WSA also has branches in London and Beijing .

Foundation of a joint world association

Since 1992, the WPBSA has been a member of the International Billiards & Snooker Federation (IBSF) amateur division of the World Confederation of Billiard Sports , which is the umbrella organization for all billiards but does not organize any tournaments itself. Due to the great media success of the snooker variant and the privileged position of the WPBSA, this constellation has led to conflicts several times, which in the past also had to be resolved before the International Court of Justice . The formation of a joint “World Snooker Federation” (WSF) with the IBSF within the WCBS between 1992 and 2004 also failed. In addition, the WPBSA is subject to the provisions of WADA .

On October 5, 2017, the disputes were resolved and the establishment of the World Snooker Federation based in Lausanne, Switzerland, was officially announced. The first chairman is also WPBSA chairman Ferguson. 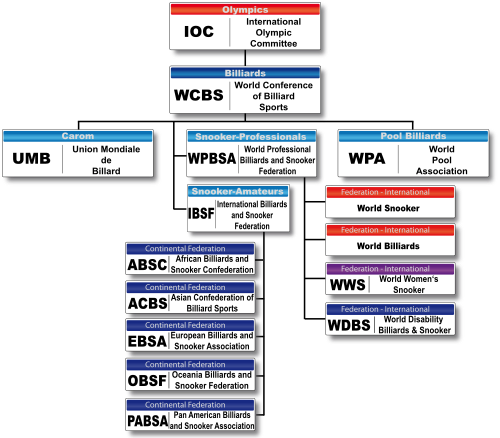 V
Billiard associations
In general, the associations are responsible for all billiards disciplines. Manage only one of which this as follows, are marked: Karambolage (K), snooker / Russian pyramid (P), snooker (S), English Billiards (E)