Together with four other volcanoes, the Mauna Loa forms the island of Hawaii.

The Mauna Loa is one of the largest active volcanoes in the world and is located in the Pacific to Hawaii , the largest island of the archipelago of Hawaii .

The Hawaiian name Mauna Loa means "long mountain", which is explained by its elongated shape from NNE to SSW.

The shield volcano occupies a large part of Hawaii , the largest island in the Hawaiian archipelago.

The mountain rises 4170  m , but extends a further 5000 m to its submarine foot in the sea. Scientists have calculated that due to the weight of the mountain, the sea floor below has sunk by around 8,000 m, so that the total height measured from the foot of the mountain is around 17,000 m.

It is therefore the second largest (but not the highest) volcano in the world. Only the Pūhāhonu is larger with a volume of about 148,000 km³. 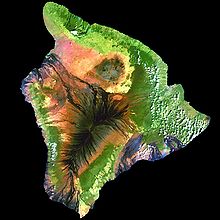 Satellite image of the island of Hawaii, Mauna Loa with the rift zones in the middle and southwest

Structure of the volcano

It is an elongated shield volcano with a summit caldera measuring 3 × 5 km and having a depth of 183 m. This caldera is believed to have collapsed 600–750 years ago, in an older 6 × 8 km caldera. Mauna Loa is currently still in the 2nd development stage of volcanic ocean islands, the shield stage. The lower part of the volcano is around 1,000,000 years old and comes from the 1st construction stage, the seamount stage . This lower part is characterized by pillow lavas and hyaloclastites , the upper part mainly by tholeiite basalts of low viscosity .

As on many large volcanoes, there are also volcanic crevices on Mauna Loa , which in this case are responsible for the elongated shape of the volcanic structure. These are two axial rift zones that emanate from the summit crater Mokuaweoweo. Each of them contains magma-filled columns.

Last outbreak of Mauna Loa in 1984

It is believed that the first eruptions in the system occurred 1,000,000 to 700,000 years ago. An estimated 400,000 years ago, the volcano passed the seamount stage and produced lavas and tephra , although the oldest rocks that can actually be clearly dated to date are around 200,000 years old.

Little is known of outbreaks during the period of purely Polynesian settlement, although archaeological finds of obsidian in the summit region can be considered evidence of ascents prior to contact with Europeans. When Archibald Menzies was the first European to reach the mountain top in 1794, there was probably no activity. A missionary's report on an eruption of the Mauna Loa is available from 1832, but the reporter was on the neighboring island of Maui , approx. 190 km away.

The breakout series in 1950

The eruption was concentrated on the south-western flank of the mountain, with a 20 km long eruption crevice drawn across the rift zone. The eruptions followed the rhythm found on Mauna Loa, with a peak eruption usually leading to a flank eruption after about 1–2 years.

Although the eruption sites were about 3200 m above the Pacific , the lavas reached them in less than four hours. Numerous lava flows emerged from staggered crevices in the course of the eruptions, but the damage caused remained relatively minor. The ʻAʻā lavas of a lava flow poured down into the valley at a speed of up to 48 km / h. The flow of these lavas into the sea was particularly spectacular.

During the eruptions that lasted for 23 days, the volcano finally produced 376 million cubic meters of lavas, the eruption with the largest known discharge rate in Hawaii.

Since the series of eruptions in 1975, increasing bulges had been found in the Mauna Loa volcano. This was joined by swarms of earthquakes in the spring of 1984, of which the deepest earthquakes were located at 13 km and the most violent reached a magnitude of 6.6. This suggested the intrusion of Dykes . Shortly before the eruptions began on March 24, 1984, the number of microquakes increased and volcanic tremor set in, so that the sensitive telescopes on Mauna Kea, 42 km away , could no longer be held still.

On March 25, the actual eruptions began with lava fountains in the southwest of the summit caldera. A large part of the caldera was covered with lava after just 2-3 hours. In the late afternoon, activity shifted to the northeastern rift zone approx. 650 m below the summit.

Over the next few days, the lava flows threatened the city of Hilo , but stopped at the edge of the same because the lava had finally spread over a wide slope area by breaking through Levees and no longer flowed in a few channels. In addition, their viscosity had increased due to cooling (ʻAʻā lava), the slope in front of the city was low and vegetation slowed down the lava flows. On April 15, the series of outbreaks ended. 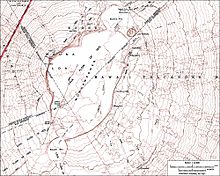 According to information from the Hawaiian Volcano Observatory , the following developments were observed in 2007:

Since the beginning of July 2004, an increasing number of volcanic tremors has been registered in the depths of Mauna Loa . The number of quakes fluctuated from week to week but was higher than normal. In the first week of September 2004 alone, there were more than 350 earthquakes at depths of 35 to 50 km. These were long-period earthquakes , the shock waves of which gradually emerge from the seismic background. This had not happened since records began in 1960.

The publication of a geophysical study in May 2007 generated a lot of media coverage. Some reports gave the impression that an outbreak was imminent. The Hawaiian Volcano Observatory noted in a May 21 report that there were no significant changes.

Like many calderas, such as Campi flegrei or Askja , Mauna Loa seems to "breathe". Immediately after the series of eruptions in 1984, an incipient bulge was noticed, but this turned into the opposite for several years. Only in 2002 did the volcano begin to bulge again, but this was slowed down again until 2009. Since 2010 there has only been a very slow bulge.

In autumn 2012, the volcano turned out to be calm. No significant bulging was found and only a few near-surface earthquakes and no noticeable gas emissions. 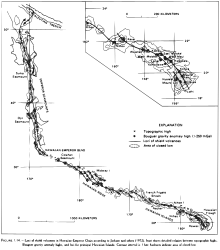 Map of the Hawaii Emperor Island and Seamount Range

Mauna Loa and the other volcanoes in Hawaii, Mauna Kea , Hualālai and Kīlauea , were formed over a hot spot . Hot spots are areas where hot currents, so-called plumes , rise from the deep earth's mantle and transport material to the earth's surface. In the case of Hawaii , the region on the Pacific lithospheric plate is slowly pushed over the hot spot by plate tectonics , whereby a whole chain of volcanic islands and seamounts , the Hawaii-Emperor chain , was formed from the Aleutian Islands to in the middle of the Pacific.

This theory has also been used to explain the different composition of Mauna Loa lavas compared to Mauna Kea lavas . The tholeiitic basalts of Mauna Loa, a volcano that is in the stage of shield construction, are therefore the result of a position directly above the hot spot. Whereas Mauna Kea has already reached the next stage, is no longer directly above the hot spot, and produces basalts of the alkaline series. Some researchers explained this with different chemical composition zones of the mantle from which the magma would originate, others with different zoning of the ascending mantle plume.

Investigations into the vegetation at the Mauna Loa volcano

In 1997, investigations were carried out at Mauna Loa at six different locations on the growth of ironwood , a flowering shrub that resembles the rhododendron and is typical of the Pacific region. One wanted to test different vegetation conditions, especially the influence of altitude and temperature. As expected, it turned out that the plants settled in the lower layers (at approx. 700 m) thrived better than those at approx. 1600 m height. It seems interesting, however, that Mauna Loa was found to be particularly suitable for such tests for a number of reasons: Because of its isolated location, only a limited number of species thrive on the islands. In addition, there are cooled lava flows on the shield volcano, which cover many climatic areas, so that a very homogeneous picture of the soil results.

Myths and legends about Mauna Loa

One day , the volcano goddess Pele is said to have ridden a sled run incognito with Poliʻahu , the snow goddess of Mauna Kea. Suddenly, however, fire burst out of the earth and Poli'ahu recognized her enemy Pele.

One day, Pele is banished by her sister and seeks refuge in the gateway to the underworld, Mauna Loa, where she lives from then on.

Locals believe that before an eruption, the goddess Pele sends a white dog down the slopes of the mountain to warn people.

Observatories on the Mauna Loa