The German interior ministers and senators unanimously approved the new federal civil protection concept at the interior ministers' conference in June 2007. The Medical Task Forces (MTF) are a central element of the planning . So far, civil protection in Germany has not been able to provide medical care to contaminated patients across the board. This will change with the introduction of the new unit.

This article represents the current status of the development of the Medical Task Force and takes into account all sources known and published up to the present time. The concept was presented to the general public at the Federal Rescue Service Congress in Kassel on April 4, 2008. Another presentation and presentation of the first concept-compliant vehicles took place at the RettMobil trade fair in May 2008 in Fulda. On May 20, 2008, the New Concept for Civil Protection, Supplementary Federal Equipment for Disaster Protection was published on the BBK website. On August 1, 2018, a revised and expanded Medical Task Force framework came into force.

With the introduction of the new concept, the previous separation between civil protection and disaster control is to be redefined. The former civil defense in accordance with Art. 73 of the Basic Law to the Civil Protection are transferred. This should include the tasks of medical care in the event of a defense, the support of the federal states in the event of major cross-border incidents and terrorist attacks. In order to be able to define the responsibilities of the various units and institutions, the federal government has defined new levels of care (1 to 4). The Medical Task Forces are to be deployed in protection and care level 4. This special protection enables more seriously injured people to be cared for in a treatment center of protection level 3, extends its stamina and also extends the treatment center to include the ability to provide emergency medical care to contaminated patients. At all previous levels of care, the tools of everyday or extended security in the municipalities or states remain responsible. At the beginning of 2010, the construction of a total of 61 units began in Kassel with the first pilot location. The complete equipping of the units should not be completed until 2017.

Medical task forces are to be integrated into the EU community procedure , among other things . This means quick help and better coordination of operations to protect the population inside and outside the EU. It is intended to strengthen cooperation in disaster control operations between the participating European countries. The procedure can be activated in the event of natural disasters, major accidents or terrorist attacks. Every country that is no longer able to cope with a dangerous situation on its own can ask for help and support, which can be provided within the framework of the EU community procedure in the form of expertise, emergency teams, resources and facilities such as hospital beds. This requires a high degree of flexibility and commitment. Similar to the units of the Federal Agency for Technical Relief , the units must be ready for use worldwide within a few days or even hours. 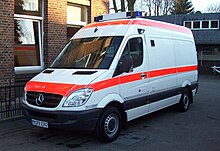 As already mentioned at the beginning, the requirement of a medical task force is the care of (possibly contaminated) patients. In order to be able to realize this, it is divided into so-called modules. These supplement the previous operational units , especially for level 4 . The following modules are planned:

Each MTF thus ideally comprises 21 vehicles by 2018, according to the current concept 26 vehicles. A total of 1242 vehicles were produced for all MTFs, which are to be supplemented in the next few years by the vehicles added as planned in 2018. In this context, the MTFs were provided with 450 medical equipment trolleys with "material to supplement the medical supply capacity" in accordance with federal regulations. These equipment trolleys enable a treatment center to be set up for use beyond the local area. According to the concept, "this supplementary part [...] is a necessary addition, since the equipment of supply levels 2 and 3 cannot be carried along in supra-local use , as it belongs to the original HVB ​​area to ensure security". The first emergency ambulance based on the new concept was handed over to the Interior Minister of the State of Baden-Württemberg on September 18, 2008 by BBK President Christoph Unger. In the course of 2008, the procurement of a total of 230 of these vehicles was initiated and delivered to the federal states in the following years.

The first emergency KTW and 25 decon trucks have been delivered since spring 2009. In spring 2009, an interdisciplinary working group created a concept for the medical equipment trolley. The tender for an initial 170 vehicles was published in February 2011 with the option for a further 220 units.

On March 10, 2010, the first MTF location started in Kassel in the pilot operation. The first team transport vehicles were delivered to MTF at the end of 2011 and continued in early 2012. The delivery of the medical equipment trolleys began in mid-2012.

On August 1, 2018, a revised and supplemented framework concept for the Medical Task Force came into force, from which additional procurements, personnel reinforcements and, above all, further training requirements result (e.g. a number of paramedic positions were defined as technical qualifications).

Task force locations as specified in 2015

According to the concept, there are a total of 61 MTFs distributed throughout Germany, the distribution depends on the population density. Every federal state has at least one MTF: 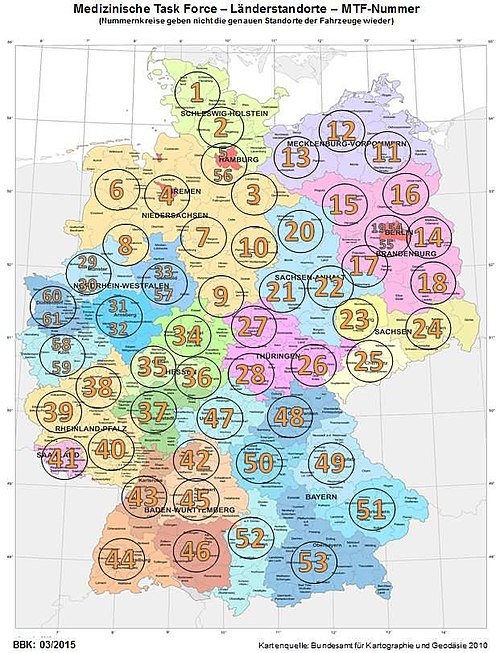 The individual locations are broken down below: