The Menach (also written Mehnach , formerly also Mennach) is a brook in the Straubing-Bogen district , Lower Bavaria . It is one of the northern tributaries of the Danube in the Bavarian Forest . 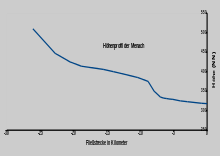 The height profile of the Menach can be roughly divided into four sections. In the first section of about seven kilometers from the source to Recksberg , there is a clear gradient and accordingly little meander formation. This is followed by an approximately ten-kilometer section with a slight gradient and sometimes pronounced meandering. In the Mitterfels area, there is a change to a short, steep section with the appearance of a torrent . When the foothills of the Danube Plain are reached, a calm section begins again in the unregulated sections with sometimes very pronounced loops in the course. The last kilometers up to the confluence with the Kinsach-Menach-Ableiter are marked by strong interventions by the flood protection structures.

In Furth (city of Bogen) the Menach branches out. The main stream on the right branch passes a rough ramp and flows into the Kinsach after less than 300 meters . The left arm, called the Menach branch, covers another 3.31 kilometers to the mouth. It first goes through a sluice and runs almost without a gradient along the residential development in Furth, crosses under several streets between Furth and the neighboring town to come to light again in Oberalteich. The short superficial course in Oberalteich soon changes back to the underground crossing of the square in front of the monastery church. In the south of Oberalteich the Menach branch comes to the surface again and changes its direction to the east. Here the Menach still runs to the left and north of the Kinsach in order to cross the diked Kinsach after about 600 meters in a culvert . The Menach leaves this diked area between the southern dike of the Kinsach and the northern dike of the Danube at the Bogen-Land pumping station , which only transports its water over the dyke with pumping power in a flood situation. After another 600 meters, this branch of the Menach flows into the Kinsach, coming from the right and 190 meters before its own mouth.

Diagram of the major tributaries of the Menach 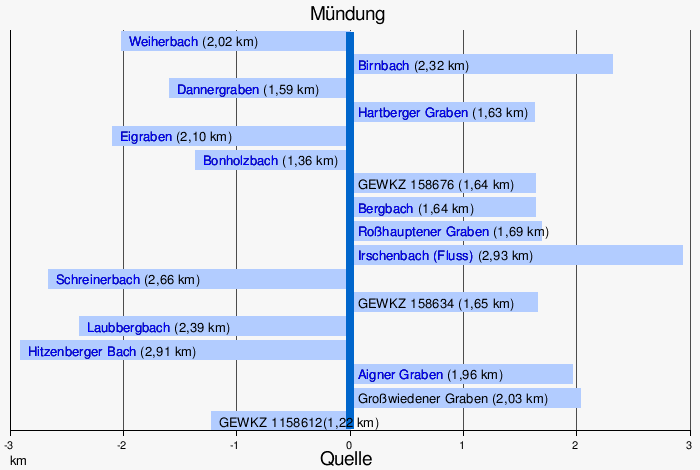 on the run from the source to the mouth. Only the entries with the greatest nesting depth are bordering waters.

The valley of the Mehnach in the Mitterfels area is still called the Perlbachtal there today. In this area of ​​the Menach, as in many other streams in the area, there were significant occurrences of the pearl mussel .

Changes in the course of the Menach over time

Old maps show a branch of the Menach near Furth. The historical location of the junction was less than a hundred meters south of the current location.

Near the junction in Furth, the right branch of the Menach flows into the Kinsach, as the Kinsach-Menach arrester is officially called today. Until the creation of this artificial river course of the Kinsach there was no body of water north parallel to the Danube, the right branch of the Menach flowed into a former backwater of the Danube, called Boigen , and then into the Danube. This backwater and the connecting waters have largely fallen dry today due to the effects of the flood protection structures. The location of the earlier mouth was about 600 meters in a south-south-west direction from today's mouth.

In the section north of Talmühle there is a significant population of the protected ostrich fern .

In the 1960s, the Menach was straightened over a length of about one kilometer through land consolidation from the Haibach sewage treatment plant to the municipal boundary near Bachwies . However, this had a negative effect on their flow behavior and thus on vegetation and wildlife. In the summer of 2000, as part of a renaturation measure , a more natural course of the stream with meander loops , stones and tree stumps was created to create a more chaotic flow and to slow the flow speed.

On the evening of April 11, 2001, between Haibach and Waldmenach, a tank truck fully loaded with 32,000 liters of heating oil fell down an embankment about three meters deep. Here, probably 15,000 liters ran into the Menach, of which a large part thanks to the local volunteer fire department , who were quick with 15 emergency vehicles on site, using oil booms could be collected and pumped out. Damage to nature was limited despite this large amount, but the smell of heating oil persisted throughout the Menach Valley for days.

The two municipal sewage treatment plants in Haibach and Mitterfels use the Menach as receiving waters . The expansion sizes (number of inhabitants) of the systems are 1500 in Haibach and 4750 in Mitterfels.

The Menach is a third order of water along its entire length.

At five locations, hydropower is converted into electrical energy in small systems. These are the following locations of earlier mills: Obermühl , Wenamühl , Höllmühl , Neumühle and Stegmühl .