This article describes the assassin Mohammed Atta. The governor of the Afghan province of Balkh can be found under Atta Mohammad Noor . 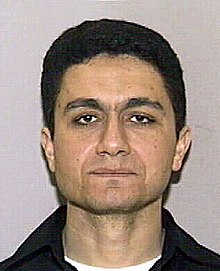 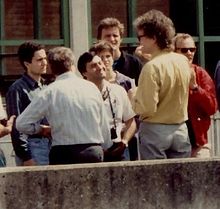 Mohammed Atta as a student in Bremen in 1993 (left)

Atta was born in Kafr el-Sheikh, an Egyptian city in the Nile Delta . His father was a lawyer . He also had a Saudi Arabian passport. Atta's father later denied any involvement of his son in the attacks and claimed that he called him the day after. Then the Mossad killed him; a year later, however, the father claimed that his son was still alive and was hiding from the United States Secret Service .

Mohammed Atta grew up in Cairo at the end of the 1980s, he studied architecture at the University of Cairo and graduated in 1990 his studies with a diploma. He then moved to Germany and continued to study under the name Mohamed el-Amir from 1992 to 1999 urban planning / urban planning at the Technical University of Hamburg-Harburg ; he finished his studies as a graduate engineer for urban planning. The topic of the thesis was Khareg Bab-en-Nasr. An endangered part of the old town in Aleppo . District development in an Islamic-oriental city , the supervisors were Dittmar Machule and Wolfram Droth. From 1998 to 2001, Atta lived with Ramzi Binalshibh and Said Bahaji , who were also allegedly part of the Hamburg terror cell , at Marienstraße 54 in the Harburg district . In the group, conspiracy theories and anti-Semitism played a major role. In the trial of Mounir al-Motassadeq , witnesses testified that everything revolved around “the Jews ” and America.

On May 18, 2000, Atta received a five-year tourist and business visa (B1 / B2) from the US embassy in Berlin, which he had applied for the day before. On June 2, 2000, he flew to Newark, New Jersey . At the airport there, he received a residence permit for six months. Atta initially rented an apartment in New York City . From July to December 2000, he and Marwan al-Shehhi completed rapid training for a private pilot's license at the Huffmann Aviation flight school in Venice (Florida) . On August 14th, he passed the exam. In order to be able to start a flight training as a commercial pilot at Huffmann Aviation from September 1, 2000 to September 1, 2001 , Atta applied to convert his visa into a student visa. In mid-September he and al-Shehhi switched to the Jones Aviation flight school in Sarasota, around 30 kilometers away . Both failed at the first stage in instrumentation in early October 2000, after which they returned to Huffmann Aviation in Venice. On December 19, 2000, they passed their commercial pilot license exam . The costs for the pilot training of Atta and al-Shehhi in the amount of 114,500 US dollars were transferred from Dubai to the USA via a nephew of Khalid Sheikh Mohammed .

On January 4, 2001, Atta left the USA. At this point, his residence permit had already expired a month. On January 10th he returned to the USA via Madrid to Miami . None of the responsible visa inspectors noticed the one-month delay and the lack of certificates confirming Atta's visa status, which were actually mandatory. According to the US entry regulations (USC § 1182), he should not have received an entry permit. On July 9, 2001, Atta traveled again to Europe, only to return to the USA on July 17, 2001 from Madrid.

In August 2018 it became known that Atta's daughter Hamza bin Laden , the son of Osama bin Laden , was said to have married. The daughter is said to have Egyptian citizenship. Until the wedding became known, it was assumed that Atta had no offspring. He was previously portrayed as a “avowed virgin ”. In Atta's will, which he wrote five years before the attack, he did not mention any relatives. The child may have been conceived during Atta's stay in Afghanistan for several months in 2000.

Atta was one of five hijackers on American Airlines Flight 11 , the first aircraft to fly into the North Tower of the World Trade Center at 8:46 a.m. in the September 11, 2001 terrorist attacks in the United States . The others were Abdulaziz al-Omari , Satam al Suquami, Wail al Shehri, and Waleed al Shehri. Presumably Atta was their leader and flew the plane. He was killed in the attack. Like all terrorists of September 11th, Atta belonged to the Salafist branch of Islam. After the attack, his will was found in a travel bag that had not been reloaded in time.

In the two-part miniseries The Path to 9/11 , Atta is portrayed by Martin Brody. It reconstructs the plot of the bomb attack on the World Trade Center in 1993 and that of the terrorist attacks on September 11, 2001.