The Okavango Delta is in the North West District Botswana located inland delta of the Okavango . It is the south by the Kunyere- and Thamalakane - columns limited, which extend transversely to the hydrological barrier Okavango and a continuation of the southern Great Rift grave breakage (Great Rift Valley) represent. The Okavango fans out and seeps into the Kalahari Basin or, to a large extent, evaporates. In the midst of the semi-arid Kalahari it forms one of the largest and most animal-rich wetlands in Africa with over 20,000 square kilometers .

The Okavango Delta has been a UNESCO World Heritage Site since 2014 . An extension to include areas of Namibia has been on the tentative list of Namibia since the end of October 2016 . 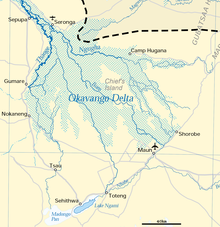 Map of the Delta 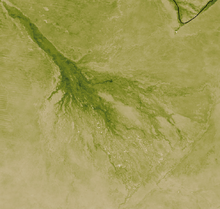 The Okavango Delta in a satellite photo

The delta (actually an alluvial cone ) is divided into six areas, which differ significantly in terms of their ecology: the so-called panhandle ("pan handle"), the permanently water-bearing lower reaches of the Okavango, the permanent swamps at the end of the panhandle, the areas that temporarily dry out on the periphery of the delta as well as the larger island areas in the interior of the delta (Chiefs Island, Chitabe Island) and the Sandveld tongues, which extend into the delta from the south.

The difference in altitude between the beginning of the panhandle and the foot of the delta in Maun is only sixty meters at a distance of around 250 kilometers. The dry areas and islands rise only a maximum of three meters above the surroundings and have a size of a few square meters to many square kilometers. The origin of these dry areas is different and goes back to the canal systems, the activity of termites or geological structures. Tectonic causes are assumed for the large island areas . 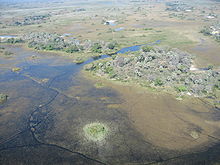 Typical area in the interior of the delta, with free canals and lakes, swamps and islands

A long dry season from April to November is followed by a shorter, wet rainy season between December and April. The average annual rainfall is 550 mm at the northern end of the Panhandle at Shakawe and decreases to around 450 mm in Maun towards the southeast.

While the Okavango at the Popa Falls at the beginning of the Panhandle reaches its highest level in March, it takes about four months for the tide to reach the Thamalakane near Maun at the other end of the delta and thereby reach a water surface of about 12,000 square kilometers. In particular, this massive delay in the tide, which is probably due to the high density of vegetation in the delta, is of enormous importance for the fauna in the region, as it causes the tide to arrive at the end of the delta precisely at the height of the dry season and thus the basis for the rich Creates animal life.

When the tide is strong enough, the remaining water is drained off via the Thamalakane in the southeast of the delta. A smaller portion of the water is above the Nhabe and Kunyere to Lake Ngami transferred, the greater part flows through the Boteti further into the Kalahari to Lake Xau and in rare cases even further to the Makgadikgadi Pan . During very strong floods, the Okavango Delta comes into contact with the Linyanti ( Cuando ) and thus with the Zambezi via the Magwekwana River (also called Selinda Gully) . Likewise, part of the water from the Linyanti flows during floods over the Savuti into the Mababe Depression , and thus into the catchment area of ​​the Okavango Delta.

It is of particular ecological importance that the water in the delta is of drinking water quality and that there is no increased salt concentration. This is remarkable because about 500,000 t of dissolved salts are brought in each year via the Okavango and 95% of the water evaporates, so that normally significant salinization would be expected. Two ecological processes are held responsible for the lack of salinization of the water body: On the one hand, transpiration (evaporation through plants) outweighs evaporation (evaporation from the open water surfaces), so that there is an accumulation of salts in the area of ​​the islands, on the other hand, it plays a role the continuously changing flooding plays a role in giving the soil the opportunity to regenerate. Another explanation is provided by peat fires , through which the salts reach lower altitudes.

Around 1,300 plant species have been identified throughout the delta. According to the four ecological areas, four different types of vegetation can be distinguished.

The permanently flooded areas of the delta outside the canals form a mosaic of open water surfaces, floating islands of vegetation and stable areas. The vegetation is correspondingly different.

In the area of ​​the temporarily flooded areas, different vegetation can be seen depending on the duration and height of the flooding. In the highest and longest flooded areas, the vegetation is similar to that of the permanently flooded areas; the drier the area, the more bushes and trees are represented.

The islands and sand tongues of the delta are surrounded by grassland , which increasingly gives way to bushes and trees in the less flooded areas. These include the Makalani palm ( Hyphaene petersiana ), Phoenix reclinata , a number of Ficus species ( Ficus natalensis , F. sycomorus , F. veruculosa ), Syzygium cordatum , Acacia nigrescens and the liver sausage tree ( Kigelia africana ). In the center of the islands there is an increased salinization of the soils due to the high evaporation, so that mainly salt-tolerant plants can be found here, but the central areas of the islands are often completely free of trees. 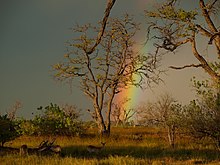 The Okavango Delta near Xakanaxa

The size of the delta and the peculiarity that the water level in the delta reaches its peak precisely when the dry season prevails in the surrounding area means that an extremely diverse and dense fauna has settled in the area around the Okavango delta. To date, 71 species of fish, 33 species of amphibians , 64 species of reptiles , 444 species of birds and 122 species of mammals have been identified. The rare brown-throated heron is found almost exclusively in the Okavango Delta.

The delta offers space for aquatic species such as hippopotamus ( Hippopotamus amphibius ) or Nile crocodile ( Crocodilus niloticus ), swampy species such as Sitatunga , Lechwe and waterbuck , but also animals that rely on water only for drinking. Even species that can survive long periods of time without water can be found in the delta, such as the goblet ( Oryx gazella ).

Many species that depend on the water, hiking in the dry season, when the Delta has its highest level, amplified by surrounding the delta one, including, for example, African elephants ( Loxodonta africana ), African Buffalo ( Syncerus caffer ) and blue wildebeest ( Connochaetes taurinus ). The abundance of animals also results in a high population density of predators, including African wild dogs ( Lycaon pictus ), hyenas (such as Crocuta crocuta ), lions ( Panthera leo ), leopards ( Panthera pardus ) and other big cats. The swamp and water areas are also home to hundreds of species of birds, some of which are very rare.

About 65 million years ago, the Okavango did not seep into the Kalahari. It flowed parallel to the Cuando and the Zambezi, and like these flowed into the Limpopo . The Luangwa and the Kafue , extended by the Chambeshi , also emptied far above the present-day estuary and their water took the same drainage route.

The uplift of the Ovambo-Kalahari-Zimbabwe Fault (OKZ) created a new watershed that cut off the Okavango from the Limpopo. As a result, a lake formed in the Makgadikgadi Basin, the highest shoreline of which was 995 m and which is comparable in size to today's Lake Victoria or at times was significantly larger. Five different shorelines have been found so far. The lake on today's Zambezi was dammed by the Chobe or Mambova faults . In the further course of the Luangwe changed its course to the east. Then the Chambeshi, which has since been part of the Congo catchment area, fell away . Then the Kafue shifted its course over the Kafue floodplains to its current bed. And finally the Zambezi broke through the faults above the Victoria Falls, so that it no longer flowed into the Makgadikgadi Basin either. As the last, the course of the Cuando was diverted by a sand dune to the Zambezi, although it is still partly in contact with the Okavango.

Years ago, about 4,000 of Lake Makgadikgadi dried up almost completely and only the Okavango Delta, the Lake Ngami , the Makgadikgadi salt pans and the Mababe depression remained as relics of the lake.

Mokoros in the Okavango Delta : dugout boats from the trunk of Kigelia africana , the liver sausage tree

The abundance of water in an otherwise arid environment is not only attractive for the animal world. Stone Age finds indicate human settlement in the area over 100,000 years ago. The Okavango Delta is also considered to be the first place of sedentarism in southern Africa and the starting point for cattle breeding. Both are mentioned by archeology around 200 BC. Dated in this area. River Bushmen were first reported in the early 17th century. In the 18th century, some tribes from the north, as well as various groups of the Batawana from the south, migrated into the delta and settled along the delta. Despite this immigration, the delta shows hardly any permanent settlement. The reasons for this are likely to be the remote location of the area and the frequent occurrence of diseases such as malaria and sleeping sickness .

Airplane after landing in the Okavango Delta, in the background a group of Letschwe

Due to its abundance of animals and the spectacular marshland, the Okavango Delta is a sought-after destination for safari tourists, anglers and hunters. There are only a few, heavily regulated accommodations, mostly as luxury lodges in the high-price segment, but also for self-catering. Often they can only be reached by plane. The Okavango Delta is part of the Kavango-Zambezi Transfrontier Conservation Area .