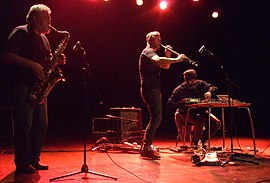 Pat Thomas (right) at an appearance with Mats Gustafsson and Evan Parker in The West End, London in 2008. Photo: Andy Newcombe

Thomas began playing the piano at the age of eight, initially classical music and reggae , before switching to jazz at the age of 13 under the impression of an Oscar Peterson concert. In 1979 he had first appearances, from 1986 in the formation of Ghosts with Pete McPhail and Matt Lewis . In 1988 he received a commission from the Arts Council Jazz Bursary to compose electroacoustic music , which he premiered at the Crawley Outside-In Festival of New Music in 1989 with his tentet , who u. a. Phil Minton , Phil Durrant , Marcio Mattos and Jon Corbett included .

In the early 1990s, Thomas worked with Derek Bailey , with whom he performed at the first International Symposium on Free Improvisation in Bremen, and Orkestra Kith'N Kin of Thomas Borgmann . He also played in Tony Oxley's quartet (recordings for Incus ); in Oxley's formation Angular Apron he performed with Larry Stabbins , Manfred Schoof and Sirone at the Ruhr Jazz Meeting . He also worked in various formations with Lol Coxhill , with Mike Cooper's Continental Drift , in a duo with Mark Sanders and in a trio with Steve Beresford and Francine Luce as well as with Charlotte Hug , Thurston Moore and Eugene Chadbourne . In 1992 Thomas founded the Scatter quartet , which also included Phil Minton, Roger Turner and Dave Tucker. Thomas also forms the Powerfield trio with Joe Gallivan and Gary Smith .