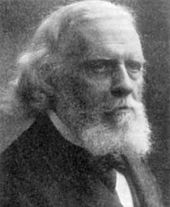 Paul Gustav Heinrich Bachmann (born June 22, 1837 in Berlin , † March 31, 1920 in Weimar ) was a German mathematician who is best known for his textbooks on number theory .

Bachmann was the son of a Protestant pastor and showed musical inclinations in his youth. He studied mathematics at the University of Berlin , where he received his doctorate in 1862 with a dissertation in the field of group theory under Ernst Eduard Kummer . In between he had studied from 1856 in Göttingen with Peter Gustav Lejeune Dirichlet , who had recently moved there from Berlin, and there he made friends with Richard Dedekind . During his studies in Göttingen he became a member of the Brunsviga fraternity in 1857 . After completing his dissertation, he went to the University of Breslau , where he completed his habilitation in 1864 with a number theory thesis on complex units and in 1867 became an associate professor. In 1875 he accepted a professorship at the Royal Theological and Philosophical Academy in Münster . In 1890 he gave up his chair after the divorce from his wife and moved with his second wife to Weimar to devote himself entirely to music (as a piano player and critic) and to writing his famous books on number theory, which came in five volumes from 1892 to 1923 (and 1872) published. Bachmann also wrote the biographical section on Carl Friedrich Gauß as a number theorist in his collected works.

A grandson of Paul Bachmann, Friedrich Bachmann , worked from 1949 as a mathematics professor at the Christian Albrechts University in Kiel .