The Paulsberg is one of the vineyards in the Radebeuler Johannisberg area . It is located in the Zitzschewig district of Radebeul in Saxony . On the site of the former winery, one of the most important Lößnitz wineries in the 18th and 19th centuries, the classicist Paulsberg manor house with an extension by the Hellerau Art Nouveau architect Richard Riemerschmid is located at Paulsbergweg 21 . The former winery with mansion, two side wings, the gate system and enclosure, as well as vineyards and the remains of the park is now a listed building , the almost 3.5 hectare green area is also considered a work of landscape and garden design . It is in the conservation area Historic vineyard landscape Radebeul . The monument protection has existed since GDR times .

The building ensemble is now a residential complex , the addresses are Paulsbergweg 21 and 21a – e.

The building group of the former Paulsberg winery is a three-wing complex, the main view of which faces south towards the valley and is formed by the former manor house. At a right angle to this, an older farm building extends up the slope on the left, the gable side of which can also be seen from the street to the left of the main house. The wing on the right is behind the main house. The structure, which also extends up the slope, consists of two parts: an intermediate structure and the Riemerschmid extension. The main house and the two wings of the building form an inner courtyard open to the vineyard. The vineyard of the Paulsberg goes directly on the Talkenbergweg into the northeastern Rietzschkenberge , which are also used for viticulture.

The two-story mansion has the address Paulsbergweg 21b. The building, enclosed by a tiled hipped roof , stands across the valley; it has a symmetrical facade with nine window axes, three of which are in the central projection. This is too high compared to the facade, but the flat triangular gable on top is lower than the roof ridge. The risalit is structured by pilasters and half- columns. In front of the risalit there is a terrace, from whose high ground floor a wide flight of stairs leads down to the vineyard in front of the house. There is a balcony-like exit above the terrace, which is supported by two pillars. The facade openings to the exit are arched, while all other windows are rectangular. The balcony grille is a Gothic cast iron grille. At the height of the eaves in the center of the risalit is a coat of arms with the monogram KEvG for Kurt Ewald von Germar, dated 1853 .

Paulsberg building group, gate system, the coat of arms of the Volksweingut on the building

The classical structure is framed by corner pilasters. The floors of the reserves on both sides are separated by a plaster tape. The ground floor windows are protected by horizontal roofs on consoles.

In the rear side of the courtyard there is a three-axis central projection that extends to the eaves, which is emphasized in the roof by a little roof house with a triangular gable. This contains foliage ornamentation in the Baroque style, plus the initials AG for Adolph Gleitsmann, plus the date 1913 . Between the storeys of the risalit there are wreaths of stucco leaves in the window axis. In the middle of the risalit is the former main entrance door, above a semicircular flight of stairs.

To the east of the main building, i.e. widening it to the right in the main view, there is also a three-axis extension (Paulsbergweg 21a). It is not quite the same height as the main house and is also covered by a hipped roof. However, it is slightly offset to the rear and, in contrast to the two-story main building, three-story. This building is also less deep than the main house. On the eastern side view there is a plaster relief with the inscription VVG Volksweingut Lößnitz , which indicates that it was the headquarters of the Volksweingut during the GDR era.

A large, barrel-vaulted wine cellar belongs to the property .

Paulsberg building group, inner courtyard view from the north, on the left the Riemerschmid annex, on the right the farm building 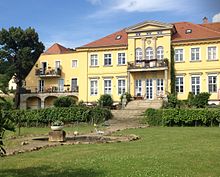 Immediately behind this extension of the main building there is a single-storey intermediate building on the back at a right angle (Paulsbergweg 21). This is with a gable roof covered whose first presented to the eaves of the left adjacent building structure almost. In this intermediate building, the right side takes up a large arched gate, to the left of which there are two windows. The gate is bordered on the sides by pillars with Ionic capitals, on top is a keystone with a sun coat of arms.

To the right of the intermediate building is a roughly square building with two floors and a tent roof. This building, erected in 1913, is higher than the intermediate structure, but lower than the extension of the manor house on the left. The house is not divided, the ground floor windows are framed by shutters.

The former farm building to the northwest has the addresses Paulsbergweg 21c – e. It is also connected to the manor house, but set back from it. The two-storey facade only extends to the upper edge of the ground floor of the main building, but on top there is a very high, steep hipped roof .

In front of the three-storey gable front facing the valley with an attic, there is a basket arch arcade made of exposed sandstone in the form of an arbor.

Only remnants of the former garden are preserved today. There is also a round basin that was formerly part of a fountain system. And a square well foundation has been preserved on the courtyard side.

The enclosure is carried out of the land by a wall with the cover plate. The mighty gate pillars are crowned by cover plates and balls.

In 1645 , Elector Johann Georg I ceded part of the vineyards to Georg Götze “for sale and inheritance”. Götze's descendants expanded the property: Between 1679 and 1750, Hofrat Dr. Christoph Ritter and his heirs combined eight independent mountain parts to form the extensive vineyard property at the entrance to the Rietschke Grund. One of them, the Sydenberg or Seydenberg , was named as a vineyard as early as 1436.

The schriftsässige winery with residential, vintner, economic, gardens and stables and wine press was first described in a contract of sale of the 1712th In 1784 the Dresden wine merchant Klöpffer acquired the estate, whose daughter brought it into her marriage to the electoral country wine master Johann Martin Fleischmann in 1794. This became the sole owner through the inheritance of his wife. He managed the winery until 1828. Fleischmann, who initiated the establishment of the wine-growing company in the Kingdom of Saxony in 1801 , rebuilt the manor house in a classical style at the beginning of the 19th century and created a park. The outbuilding to the west remained relatively unchanged. In those years he should be there more often by the Elector Friedrich August III. have been visited.

In 1828 the property was sold to Charlotte Brüning. In the contract it was stated that "flowers and garden plants in pots and gardens, 4 beehives, fruits and the machines and vessels belonging to the winery as well as wine in barrels were calculated in the purchase price of 5200 thalers." The winery was given its current name in 1837 by Charlotte Brüning in memory of her deceased husband. The property was owned by the merchant Dittmars until around 1853, and from 1853 by Kurt Ewald von Germar , who carried out further modifications (such as in 1871 by the Ziller brothers ) and in 1856 built a neo-Gothic summer house on the edge of the forest. This was destroyed again after 1945. From 1897 the winery was owned by Carl Oskar von Friesen .

From 1911, the government councilor Adolph Gleitsmann had major renovations carried out. In 1913 the manor house received an extension from the Hellerau Art Nouveau architect Richard Riemerschmid . In 1931, Gleitsmann separated part of the property for a horticultural company. His widow sold the winery in 1940 to the Saxon state government, which placed it under the state property administration, which also included the viticulture research and teaching institute in Oberlößnitz . The recovery after the phylloxera disaster, which began in the 1920s, was continued by French and Soviet prisoners of war during the Second World War.

The city ​​winery Radebeul and the state winery of the State of Saxony both became legal entities of the Central Association of People's Own Goods (ZVVG) Southeast on October 1, 1949 . This was subordinate to the Ministry of Agriculture and Forestry of the State of Saxony. From the union of the two wineries, the state-owned wine estate "Lößnitz" arose . The Paulsberg winery, which has belonged to the state property administration of the Saxon state government since 1940, was designated as the seat of the Volksweingut.

The Volksweingut cultivated 39.1 hectares of agricultural land in 1952, of which 23.4 hectares were vineyards. Also in 1952, their first sparkling wine was produced using bottle fermentation ( Sachsengold brand ).

In 1954 it became the VEG (B) Volksweingut , which belonged to the Department of Nationally Owned Goods of the Dresden District Council. From 1963 it belonged as VEG (Z) Weinbau Radebeul to the VVB Saat- und Pflanzgut Quedlinburg .

Due to the plans of the Radebeul City Council in April 1958 to also produce sparkling wine using large-tank high-pressure fermentation processes in the future, the Volksgut received the von Wackerbarths Ruhe estate , on which, in addition to the historic castle complex, a wine and sparkling wine cellar and a bottling line from 1967 to 1969 was rebuilt.