The landscape Loessnitz formative steep slopes of granite - porphyry and syenite weathering soils with their dry-laid syenite - vineyard walls are not only as a conservation area designated, but also since 1999 as a whole conservation area Historic vineyard landscape Radebeul been protected. 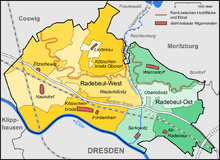 The Johannisberg is located in the western part of Niederlößnitz and from there to the western city limits (brown: the slope edge with the steep slopes to the south)

The Radebeuler Johannisberg location is located in Niederlößnitz, Naundorf and Zitzschewig. It stretches from Moritzburger Strasse, the connection from the Anger von Kötzschenbroda to Lindenau past Friedewald , westwards to beyond the city limits. It covers approx. 31 ha.

The following vineyards belong to the approximately 6.7 hectares of steep slopes:

The former winery with the Johannisberg vineyard, which gives the single location its name, is located on Naundorfer Flur north of Meißner Straße and west of Kottenleite, the vineyard is rather flat.

The Lößnitz is located in the Elbe Valley in the north of the Elbe and benefits from the mitigating influence of this river. Due to the climatic conditions on the south side of the steep ascent of the Elbe slope, fine fruit and wine can be grown in Radebeul. The annual average temperature is 9.2 ° C. The average annual sunshine duration, measured on the climate diagram of the former Wahnsdorf weather station , is 1634 hours, above the German average of 1541 hours.

As Radebeul in the Elbe Valley has the mildest climate in Saxony, it is also called Saxon Nice , based on a saying by the Saxon King Johann around 1860.

The Lößnitz rises from the Elbaue over the Elbe terrace to the steep ascent of the Elbe slope, which, as part of the Lusatian fault, consists of weathered syenite soils and merges into the plateau of the Lusatian plate . It is cut by several notch valleys, of which the Lößnitzgrund with the Lößnitzbach permanently carries water, while the other valleys, the Fiedlergrund , the Kroatengrund and the Rietzschkegrund are formed by so-called lost water , which seeps away after reaching the water-permeable sandy soil of the Elbterrassen and back into it Groundwater passes over.

Because of the steepness of many locations above the Elbe Middle Terrace with its 30% to a maximum of over 100% gradient, the soil layer made of weathering products of the subsoil is quite thin. The vines therefore often have to be cultivated in terraces with dry stone walls.

Grape varieties in the Johannisberg

While the Saxon cultivation in the Middle Ages was mainly characterized by the mixed set , since the beginning of the 17th century single-variety cultivation ("Wuerttemberg style") has dominated. Are spread mainly Müller-Thurgau , Riesling , Pinot Blanc , Pinot Gris , Traminer , Kerner , Pinot Noir and Scheurebe . The gold Riesling is grown in Germany only in Saxony.

The long Zechsteinweg below the Zechstein in Zitzschewig is the educational trail of Saxon viticulture with all the grape varieties grown in the upper Elbe Valley, each with brief characteristics and their cultivation requirements. 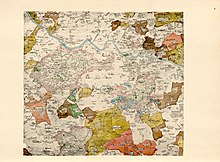 House fly whisk with Jacobstein above 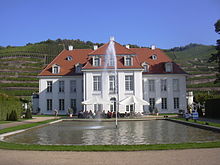 Wackerbarths Ruh ' castle in front of its own Wackerbarth vineyard 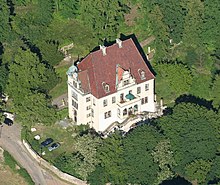 The first automobile manufacturer in Saxony Emil Nacke (1843–1933) acquired the Johannisberg winery in Naundorf north of Meißner Strasse on Kottenleite in 1897, where he lived until the end of his life. The vineyard of the same name, which now belongs to Wackerbarth Castle, is the namesake for the Radebeuler Johannisberg vineyard . Nacke was a successful winemaker. In the Kötzschenbrodaer General-Anzeiger of September 3, 1903, the commission for phylloxera control confirmed : "... this really beautifully laid out vineyard with many donations deserves the highest recognition and the vines are characterized by extremely lush, strong growth." The Johannisberg was one of the few vineyards in the Lößnitz that were spared from the phylloxera disaster .

West of the Johannisberg is the Bischofspresse , which belonged to the Meißner bishops until the secularization in 1539, at Matthias Oeder it was called Simon Claus Preß . While the first building was probably erected around 1680, it was extended by four meters to its current dimensions in 1773. Around 1800 the owner at the time, the Dresden city surgeon M. Elz, set up a classical round temple in the garden, which was dismantled in 1970 and rebuilt in the mid-1990s.

Also in the possession of the Meißner bishops in the 15th century was the hilltop on the Zitzschewiger Flur , known as the Landeskrone . The name Wettins Höhe has been documented since 1758 . The central building of the villa there (House Wettinhöhe) was built on the associated winery in 1858 , which was expanded in 1879/1880 by the Ziller brothers to become today's representative, so-called Wettinhöhe Castle .

The first known owner of the Mohrenhaus in 1544 was Hans Hutter from Leipzig. In 1819 it was bought by Ludwig Pilgrim, a Leipzig merchant, who was a co-founder of the Bussard sparkling wine cellar on the opposite slope edge in the Steinrück region . He used his property to store wine.

The former Zechstein winery with vineyards and forests already existed in the 17th century, it is located on the Zitzschewiger Flur west of the Barkengasse near the Hohenhaus . From 1795 it was owned by Count Friedrich Magnus I of Solms-Wildenfels (1743–1801). Today's two-story mansion was built in 1852 instead of a previous building mentioned in 1706.

In 1675 the baroque house fly whisk was built , to which the vineyard fly whisk belonged. During and after the reign of August the Strong , more and more country houses were built in Niederlößnitz, for example Wackerbarths Ruh ' from 1727 . A vineyard pavilion from 1742 stands above Wackerbarth Castle and the fly whisk on the edge of the Elbe slope, the Lößnitzhöhen, the Jacobstein .

Between 1679 and 1750, eight independent mountain parts were merged into the Paulsberg vineyard property on the Zitzschewiger Flur . One of them, called Sydenberg or Seydenberg , was already known as a vineyard in 1436. The manor house at the entrance to the Rietzschke Ground was rebuilt in a classical style at the beginning of the 19th century. In 1913 the manor house received an extension from the Hellerau Art Nouveau architect Richard Riemerschmid .

In 1742 the brewers of the Niederschänke , the Oberschänke and the inn in Naundorf sued the innkeeper of the Winkelschänke on the Liborius vineyard , east of the Jacobstein, in his wine bar for unauthorized serving of beer from Cossebaude and Oberwartha . The lawsuit was rejected, however, because "the Kötzschenbroda judges and Schöppen described the beer in their own taverns as bad and undrinkable".

In 1743 the building was built on the Rooseschen Weinberg , a large vineyard estate, which the former Saxon Prime Minister Heinrich von Brühl Friedstein acquired in 1763 shortly before his death and renamed it Mon Repos . It later became Friedstein and then Altfriedstein . 1771 was built on the western part of Friedstein Neufriedstein with its mountain house (Mätressenschlösschen) .

Further west in Zitzschewig, the playwright Gerhart Hauptmann stayed frequently in the Hohenhaus between 1881 and 1885 ; the hillside was mentioned as a vineyard as early as the 13th century. The summer residence of the Meißner bishops was built here in the 15th century and remained in their possession until the middle of the 16th century. During the 17th century, a winegrower's house was converted into a Hohenhaus, which, however, only got its present appearance at the end of the 19th century.