The Lusatian Fault , often also called the Lusatian Thrust , is the most important geological fault zone between the Elbe Valley and the Giant Mountains . It separates the rejection of the granite of Lausitz ( Lausitz granite massif ) from the south upcoming chalk - sandstones northern bohemia . A jump height of several hundred meters is assumed, with the area to the north being raised or pushed back against the area to the south.

The beginning of the fault is to be found in the west around Oschatz . Characterizing the landscape, the fault appears for the first time as a steep step near Weinböhla . From there it runs eastward on the northern edge of the Dresden Elbe valley widening and forms the Elbe slopes from Radebeul via Dresden to Pirna . From then on, it runs along the northern edge of the Elbe Sandstone Mountains via Hohnstein and Hinterhermsdorf . In Hohnstein, on the so-called Wartenbergstrasse, there is the only geological outcrop where the Lusatian granite lies directly above the sandstone.

Further to the east, the fault follows the northern edge of the Lusatian / Zittau Mountains via Jiřetín pod Jedlovou ( St. Georgenthal ), Waltersdorf and Olbersdorf . In terms of the landscape, however, the fault occurs mainly east of the Zittau Mountains.

In Czech territory again, the fault essentially follows the ridge of the Jeschkengebirge . The Ještěd ( Jeschken ) is the highest point at the fault as a dominant landscape that can be seen from afar. The fault leads almost in a straight line along the Ještědsko-kozákovský hřbet to the east - broken by the valleys of the Mohelka and Jizera - to Kozákov in the Bohemian Paradise . In Malá Skála , the Suché Skály is the most remarkable geological outcrop in the area of ​​the fault. There, the sandstone banks that were once horizontal were brought into a vertical position by the pressure of the fault and today they form an impressive rock formation. 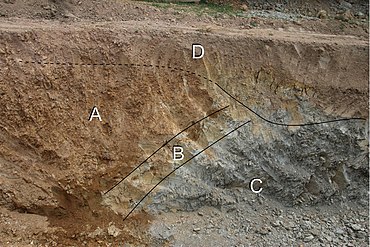 The overturned rock was formed in the early coal period (Lower Carboniferous). The rock layers of the carbon were conglomerates , greywacke , clay slate and limestone , sediments of the primeval sea. The granite massif was tectonically piled up on these rock layers in the course of the Variscan mountain formation .

Granite is a deep rock that was tectonically lifted. During this process, faults and faults arose, which enabled eruptive rock magmas to be deposited en masse in places over the granite. The Lusatian granite massif consists of several granitic intrusions of granodiorite , two-mica granite and stick granite. The granodiorite is the main deposit and is mined in several quarries ( Demitz-Thumitz , Königshain , Kleinpostwitz near Bautzen and others). Grauwacke was mined in the quarries near Kamenz mainly for the production of concrete. Ores are hardly contained in the Lusatian granites, but are occasionally found in gangue rocks ( quartz , magnetic gravel ).