The Pelyül tradition ( Tib . : dpal yul ) is a sub- school of the Nyingma school of Tibetan Buddhism . Along with Kathog , Mindrölling , Dzogchen , Shechen and Dorje Drag, Pelyül is one of the so-called “six large seats” of the Nyingma. The tradition goes back to the Pelyül Monastery in the Pelyül district of the same name in Karze (tib .: dkar mdze ), Sichuan .

As founder of Pelyül tradition of true Mahasiddha Kunzang Sherab (1636-1699), the first throne holder of the newly built monastery Pelyül Oseling and its main students back. In Tibet, apart from the main monastery Oseling , they founded the monasteries Lhatse , Jangang , Shugang and Tsangda . These four monasteries, together with the Oseling monastery, became the starting point for spreading the tradition.

Of the four main directions of Tibetan Buddhism, the Nyingmapa are representatives of the oldest tradition of Tibetan Buddhist traditions. They keep the doctrine and application of Dzogchen - "the great perfection" or the doctrine of the realization of the "pure nature of the mind" - in their transmission lines. The tradition of Dzogchen goes back to the origins of Buddhism and was brought to Tibet at the beginning of the 9th century AD, especially by Guru Padmasambhava . In 1665, a Nyingmapa lama who was outstanding at the time, the Vidyadhara Künsang Sherab, took over the throne in the recently completed Pelyül Monastery in Eastern Tibet and subsequently established the lineage of Pelyül-Dzogchen, which is still uninterrupted today. 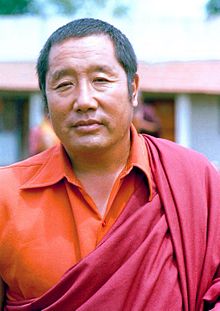 The 3rd Drubwang Pema Norbu Rinpoche (short: Penor Rinpoche ) was the head of the Pelyül lineage in the Tibetan Buddhist tradition of the Nyingma school. He was a recognized lineage holder of the complete transmissions of Dzogchen. He was born in 1932 in Kham / Eastern Tibet. Independently of each other, the 5th Dzogchen-Rinpoche and Khenpo Ngaga, the master of his previous incarnation, recognized in him the reincarnation of the great Indian master Vimalamitra and the reincarnation of the 2nd Drubwang Pema Norbu Rinpoche (1887-1932). At the age of four he made the long journey to Pelyül Monastery in the Kham region to take the monastic vows of refuge there. This monastery was founded in 1665 by Rigdzin Künsang Sherab. Since then it has been considered the center of a Dzogchen tradition, which in its very distinctive form was transferred from throne holder to throne holder. At the age of twelve, Penor Rinpoche was solemnly enthroned by his masters as the 11th head of this line.

In the course of his spiritual development, Penor Rinpoche was given the extremely rare opportunity to conduct a four-year retreat in the Tarthang Monastery in the sole presence of his closest master, Chogtrül Rinpoche. Chogtrül Rinpoche later became known for the fact that, even in old age, he made the greatest efforts to convey all transmissions of the Pelyül tradition to him in full. This was an essential basis for the outstanding spiritual realizations of Penor Rinpoche to come to light. In connection with his relentless commitment to the preservation and continuation of the teachings in exile, he was elected head of the entire Nyingma tradition in 1993 in Bodhgaya (India). In 2001 he passed this position on to the 11th Minling Thrichen Rinpoche . On March 27, 2009, Penor Rinpoche died in Namdröl-Ling (Tib .: rnam grol gling ) monastery in Bylakuppe.

In order to preserve the Pelyül tradition in exile, Penor Rinpoche began building and expanding the Namdröl-Ling monastery in 1963, immediately after fleeing Tibet, in the southern Indian town of Bylakuppe. Since then, this place has been the heart of all Penor Rinpoche's activities. The monastery itself is now one of the largest outside of Tibet, and a retirement home, a hospital, a retreat center and a nunnery were gradually founded. The centerpiece, however, is the Ngagyur Nyingma Institute (Institute for Higher Buddhist Studies and Research), which he himself directed, which enjoys an excellent reputation beyond the Nyingma School. Here particularly talented monks receive a structured education after nine years of study in the higher degrees of Buddhist philosophy. He awards graduates with special awards the title “ Khenpo ”. As such, they will then be sent to the Pelyül Centers all over the world to teach Dzogchen and enable students to realize it.

After Penor Rinpoche left Tibet in 1963, he began to build the Thegchog Namdröl Shedrub Dargyeling (Namdröl-Ling) monastery in Bylakuppe, South India. It is the largest monastery outside of Tibet. Today the monastery has a sangha (Buddhist community) of over 5,000 lamas, monks and nuns, with a primary school, a higher education institute, a retreat center, a nunnery, an old people's home and a hospital. In 1985, Penor Rinpoche began to spread the Dharma in the West. He has established many Dharma Centers in the United States, Canada, Hong Kong, Taiwan, Singapore, Philippines, India, Nepal, England, Germany, Greece, and Switzerland.

The Ngagyur Nyigma Institute (Higher Buddhist Study and Research Center) is a project led by Penor Rinpoche. Here over 300 monks study the sutras and tantras before they become khenpo and teach in the various Nyigmapa monasteries and centers. The faculty teachers at the institute, which has now achieved a worldwide reputation, include Khenpo Pema Sherab Rinpoche, Khenpo Tshewang Gyatsho Rinpoche and Khenpo Namdröl Rinpoche.