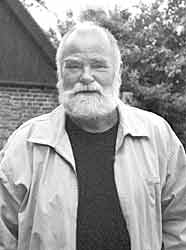 Peter Makolies was born in Königsberg and grew up in Wölfis in Thuringia . From 1951 to 1953 he took his first life drawing lessons from Carl Michel . In 1953 he began an apprenticeship as a stonemason in the Zwingerbauhütte in Dresden , which he completed in 1956. In 1955 he had also attended drawing courses with Jürgen Böttcher , known as Strawalde , at the adult education center in Dresden. His classmates and friends were Winfried Dierske , Peter Graf , Peter Herrmann and AR Penck . Together they formed the artist group Erste Phalanx Nedserd . Makolies, Graf and Herrmann were portrayed in Jürgen Böttcher's 1961 short documentary Three of Many , which was later banned .

Since 1958 he has made his own work as a sculptor, in 1964 he passed the master's examination as a stone sculptor. Makolies has been a freelance sculptor since 1966. With his sculptural work, Makolies is also active in the preservation of monuments. Trips to Italy (1984) and China (1985) influenced his work.

In the field of monument preservation, Makolies worked among other things in 1993/1994 on the courtyard facade of the Dresden cultural town hall in Königstrasse . His works include the four 2.25 meter high sandstone figures.

At the entrance to the pedestrian tunnel in the Inner Neustadt there is a relief on Dresden's history created by Makolies. It was made in 1978/1979 and shows the Neustädter Markt and the main street before 1945. There are also thematically related reliefs by Egmar Ponndorf , Dietrich Nitzsche and Vinzenz Wanitschke .

Makolies created four sandstone masks for the outer facade of the functional building of the Semperoper , which is used as a rehearsal stage, functional building and administrative headquarters. These were created between 1982 and 1984 and have a size of 2.7 by 5.2 meters.

On the east side of Sachsenallee on Sachsenplatz there is a larger than life sandstone sculpture he created on the green area - The Great Reclining figure .

Makolies' bronze sculpture stands between Ferdinandsplatz and Prager Straße , a grenade that was cast by the Ihle brothers in Rabenau in 1998 .

Probably the best known work by Makolies in Dresden is the "Böttgerstele" created in 1982 on the Brühl Terrace . It is a 190 centimeter high sandstone stele with a medallion made of Meissen porcelain , showing Johann Friedrich Böttger , one of the European inventors of porcelain . The stele is reminiscent of Böttger, who was imprisoned in the fortress below to make gold.

Makolies created the font and the lectern for the Loschwitz church as part of the reconstruction from 1994 to 1995. The tombstone for the artist Hermann Glöckner in the Loschwitz cemetery was also made by Makolies . The white, slender tomb shows only a large, engraved “G” as the artist's signature and does not contain any further references to the deceased.

In Frankfurt (Oder) the sandstone sculpture Die Große Sitzende was erected on March 18, 1977 in the former “Lienau Park” . A sitting naked woman is shown. Her legs are bent and she rests her left arm on her left leg. The right hand is held on the base of the figure. The documentary In Lohmgrund of Jürgen Böttcher shows the origin of this figure.

Rostock is since 2000 the plastic Book Tower . The stone sculpture made of Bulgarian sand-lime stone has the dimensions 168 × 70 × 46 centimeters. The sculpture, created in 1985, was originally called Reading and Studying .

White terracottas adorn atrium A in the Specks Hof passage in Leipzig .

In Gera there is a double-headed larger-than-life girl's head. The sculpture, created in 1983, shows an ancient and a contemporary girl's face.

Since 2016, Makolies' sculpture Art and Culture has taken its place again in front of the Gera Culture and Congress Center after a 16-year break .