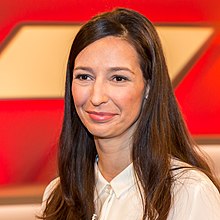 Pinar Atalay in the show Maischberger , 2018

Pinar Atalay (born April 27, 1978 in Lemgo ) is a German radio and television presenter .

Atalay grew up as the daughter of Turkish immigrants in Extertal . After graduating from high school , she ran a boutique in Lemgo for a year . She then applied as an intern at Radio Lippe . Here she later worked as a freelancer and volunteer . After that she was an early presenter for the local radio antenna Münster for a while .

In WDR television Atalay hosted regularly broadcast Cosmo TV for ARD-aktuell news magazines and special programs, including for the first (eg ARD-focus ). She also works as a reporter and presenter on NDR television , on the NDR radio and on Radio Bremen . From 2010 she moderated the Phoenix Round on the Phoenix broadcaster . Since March 2014 Atalay hosted the evening news . She represents Caren Miosga and Ingo Zamperoni . In addition, since the beginning of 2014 she has been running the ARD business magazine Plusminus . She is the first Presenter of the Day with Turkish parents.

Pinar Atalay is married and has a daughter born in January 2017. She lives in Hamburg.