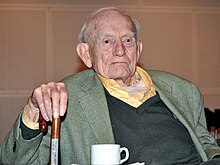 Richard Leacock (born July 18, 1921 in London , England , † March 23, 2011 in Paris , France ) was a British director and cameraman of documentaries and one of the founders of Direct Cinema .

Richard Leacock grew up on a banana plantation in the Canary Islands (his family traded Madeira wine and bananas ). When he was sent to a school in England at the age of eight, he was looking for a way to describe life in the Canary Islands to his classmates. Eventually he made his first film, Canary Island Bananas , a ten minute long silent film .

From 1938 to 1939 he accompanied with his camera an expedition of ornithologist David Lack to the Canary Islands and the Galápagos Islands . To learn more about the technical basics of filmmaking, he studied physics at Harvard University . During this time he worked as a cameraman and assistant editor on other directors' films.

During the war he worked for the US Army for three years as a battle photographer in Burma and the Republic of China . In 1946 Robert J. Flaherty hired him as a cameraman for Louisiana Legend ( Louisiana Story ). He then worked in a number of relatively conventional professions until 1954.

In 1954 he made the first film since Canary Island Bananas , which he wrote, directed, operated the camera and edited . Toby and the Tall Corn , aired on prime-time on a culture television channel, brought Leacock in touch with Roger Tilton , for whom he directed Jazz Dance , a film made through innovative use of the handheld camera and the principle of simultaneous uninterrupted recording of images and sound (the most important stylistic devices of Direct Cinema ) convey the feeling of being in the middle of a crowd of people dancing to Dixieland music.

The use of the hand-held camera and direct sound recording were also so important for Leacock because working with a heavy, fixed camera and the laborious, usually subsequent synchronization of image and sound prevented spontaneity for both the filmmaker and the people being filmed. Now the cinematic technique was no longer in the foreground, direct, inconspicuous observation was possible, which led to more authentic recordings. The break with tradition was abundantly clear: if the images of the documentaries were previously perfect and smooth, now moving, blurred, sometimes blurred shots prevailed.

In the early 1960s, he co-founded the production company Drew Associates with Robert Drew , DA Pennebaker and others . The most significant result of this collaboration was the documentary primaries ( Primary ), who described a primary in Wisconsin and close portraits of John F. Kennedy and Hubert Humphrey delivered. Henri Langlois called Primary one of "perhaps the most important documentaries since the Lumière brothers ".

Leacock left Drew Associates in 1963 and started his own production company with Pennebaker. In 1968 he and Ed Pinkus built a new film school at MIT . He was in charge there until 1988. In 1978 he was accepted into the American Academy of Arts and Sciences . In 1989 Leacock moved to Paris , where he made Les oeufs à la coque , the first film shot with a small video-8 handycam that was shown on French television at prime time.

Leacock worked more often in films that took a political stance (for example, The Chair protests against the death penalty). He describes himself as a "communist relic". In his essay The Art of Home Movies , Leacock celebrates the film production that digital technology has made possible for everyone as a growth in democracy. It is in keeping with this attitude that Leacock invites internet users on its website to edit pages and contribute media of all kinds.

“I tend to fool around on the fringes of events. I see myself as an observer. Sometimes excited. I don't even see myself as a filmmaker, and I don't really want to do them either, those big, huge things that are brought to the cinema. Boring, at least most of them. All I can do is capture fleeting impressions. […] By the way, this has almost nothing to do with the word verité (which means 'truth'), but with capturing the feeling of being there. "

“I have problems with television editors. They don't understand me. They want everything to be explained. I prefer to leave things open and convey the feeling of being in the center of the action. But all I see in television films today are people chatting, talking heads. I'm not interested. With me everyone should just be himself - no talking skull. "