The successor was the Saab 900 introduced in the late summer of 1978, but next to which it remained on offer. As a slightly modified version, the 99 rolled off the production line as the Saab 90 from summer 1984 to mid-1987 .

The Saab 99 had a two- or four-door self-supporting body, front-wheel drive, independent front suspension on double wishbones and a rigid axle at the rear , which was guided lengthways by two Watts rods left and right and a Panhard rod crosswise.

From the spring of 1970 the car was also available as a four-door and was fitted with a new, padded dashboard and headlight washer system.

The Saab 99 was laboriously manufactured: it took 73 hours to assemble a vehicle. Modern vehicles have assembly times of less than ten hours, but with less vertical integration .

The body was designed to be so stable that the Saab 99 initially received homologation for motorsport without the need to install separate roll bars, which was otherwise only the case with downright motorsport vehicles such as the Lancia Stratos .

Saab had originally commissioned the British development company Ricardo to design an engine for the 99. In the course of development, however, it quickly became clear that designing your own engine was too expensive and too risky for a company as small as Saab.

Ricardo had excellent contacts with various British car manufacturers. This made it known that at the same time at the manufacturer Triumph, a team led by the local designer Harry Webster was developing a new four-cylinder for the Triumph automobiles. Ricardo then mediated a contact between Saab and Triumph. So Saab was ultimately able to adopt the new Triumph engine for the 99.

Initially it had a displacement of 1.7 liters, which was later increased to 1.85 liters. This could be combined with a D-Jetronic injection system. The engine was installed lengthways over the front axle, the four-speed gearbox was under the engine. An automatic transmission was available from 1970. The reverse installation position of the engine with the flywheel facing the radiator and the camshaft drive in front of the bulkhead was remarkable. A later two-liter version of this engine (H series) was a pure Saab development, which in many respects (higher engine block in favor of a wider top land, distributor drive directly from the camshaft) diverged from the Triumph design and not from that of Triumph-built two-liter variant is related.

Together with group partner Scania , who had gained experience with supercharged diesel engines , a modern engine with exhaust gas turbocharging was developed . Unlike previous turbo engine concepts of the competition, this worked according to the torque philosophy , characterized by a relatively small turbocharger , which was combined with a specially developed wastegate valve for boost pressure regulation. This system generated sufficient air pressure at lower engine speeds and responded more quickly than conventional turbochargers. The engine developed 107 kW (145 hp) at 5,500 rpm and accelerated the vehicle from 0 to 100 km / h in 8 seconds; the top speed was just over 200 km / h. The vehicle was optionally available with water injection , which additionally increased performance. The model was only introduced in 1978 after an intensive test phase with 100 test cars that were made available to motor journalists and test drivers for detailed analysis.

In 1977 a model with a bivalent drive (petrol or petroleum ) was presented for the Finnish market. This was manufactured exclusively in the Uusikaupunki (Nystad) plant and was only available with the two-door body of the Saab 99.

As with the Horizon Petro , it had a low-compression engine. It was the two-liter turbo engine, but without a turbocharger, which produced 63 kW (85 hp). The top speed was 150 km / h. The tank was divided, with the larger half for the kerosene and 45 liters. Outwardly, it differed in addition to the Petro lettering by a second filler neck, which was located to the right of the license plate. 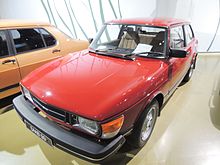 In the late summer of 1978 the Saab 900 was introduced, a somewhat lengthened and expanded model based on the Saab 99. The variety of models has now decreased somewhat with the 99 and so the 99 Turbo was only offered in Europe as a two-door model for homologation purposes . Just like the EMS in only small numbers. At the beginning of the 80s, the range of 99 models had only shrunk to two- and four-door models with single-carburettor 100 hp engines in order not to compete with the 900 model.

From 1981 the 99 was only produced in Finland at the Saab-Valmet plant there, but at an excellent level of quality.

In 1982 the so-called H-engine also used in the 900 was installed as a further development of the existing engine and a five-speed gearbox was available.

A gentle facelift and good equipment ensured that sales figures rose again from 1983 onwards. Even in 1984, the last year of production, the steadily improved and meanwhile very mature car was upgraded again with a contactless ignition system and modified steering geometry.

1985 was not yet finally over, because the Saab 99 was continued in August 1984 as the Saab 90 in an unusual style: The front section was provided with the rear of the Saab 900 Sedan and could thus function as an entry-level model until August 1987. Since the 900 is actually a further development of the 99, the concept could exist until the end of 1993.