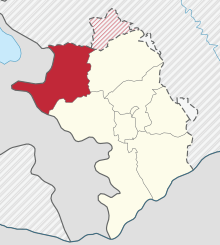 Location of Shahumyan in Nagorno-Karabakh

Shahumyan ( Armenian Շահումյան , Russian Шаумян , also Shahoumyan , named after the Armenian revolutionary Stepan Shahumyan ) is a province of the internationally unrecognized republic of Arzach , according to whose legislation it consists of the former Shahumyan district north and the former Kalbadschar district around the town of Karvachar (Քարվաճառ , Kəlbəcər, Кельбаджар or Карвачар) northwest of the former Nagorno-Karabakh Autonomous Oblast . However, only the Karvachar area is actually under their control. While the nominal capital Shahumyan (until 1938 Nerkin Shen, Неркин Шен or Ներքին Շեն, renamed from Azerbaijan to Aşağı Ağcakənd in 1992) is under Azerbaijani control within the Goranboy Rajon , the administrative seat is de facto in Karvachar.

The de facto area of ​​the Shahumyan Province lies west of the former Nagorno-Karabakh Autonomous Region and has been occupied by units of the Artsakh Republic and the Armenian Army since 1993 . The province coincides here with the Azerbaijani district of Kəlbəcər , which was expanded pro forma by the Azerbaijani government in 1991 in the course of the dissolution of Nagorno-Karabakh Oblast to include the western part of Martakert province east of it .

In this part of the province is the Tartar Canyon and near it the Dadiwank Monastery (also called Chotawank / Khotavank), just outside the former boundaries of the Nagorno-Karabakh Autonomous Region. The administrative center of Karvachar is also located here.

In the village of Zar there are only sparse remains of the once important Armenian prince's seat. Even in the late 1890s, the Armenian bishop Makar Barchudarjanz was able to take photographs of the ruins of the Monastery of the Blessed Virgin (built in 1225), the chapels of St. Sarkis and St. Gregory (built in 1274) and other medieval buildings, most of which date from the 13th to the 18th century 15th century.

According to research by the Armenian historian and archaeologist Samwel Karapetjan (* 1961), the old Armenian church buildings of Tsar had been used by the Kurdish residents as a quarry for the construction of residential and farm buildings since the end of the 19th century. In the 1940s and 1950s in particular, the buildings were demolished at an accelerated rate for this purpose. In the walls of a school built in the 1950s, a total of 133 stone fragments with remains of Armenian inscriptions and stone reliefs were found.

To the north of the former Nagorno-Karabakh Autonomous Oblast lies the former Shahumyan Rajon, which in Soviet times had an almost entirely Armenian population . The capital Nerkischen or Nerkinschen (Nerkin Schen, Неркин Шен or Ներքին Շեն, "lower" or "inner hamlet") was renamed in 1938 in honor of Stepan Shahumyan in Shamyanovsk ( Russian Шаумя́новск ) or Schahumjan ( Armenian Շահումյան ). After the Armenians were expelled in 1992, she was given the Azerbaijani name of Aşağı Ağcakənd . Other important places were Beaschen, Martunaschen and Gjulistan. 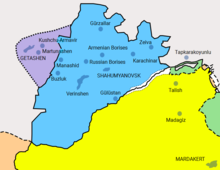 Just like the area of ​​the former Autonomous Oblast Nagorno-Karabakh, the areas claimed today by the Republic of Arzach as the province of Shahumyan belonged in ancient times to the Armenian province of Arzach , in the Middle Ages to the kingdom of Arzach and then to the principality of Khatschen . In the 17th and 18th centuries, the northern area belonged to the Meliktum Gjulistan - one of the Five Principalities of Karabakh - under the Melik-Abovyan princes, who had their seat in the Gjulistan fortress right on today's front line.

The village of Tsar on today's border with the Republic of Armenia, called Wajkunik until the 12th century, was the seat of the Armenian noble family Dopjan with its fortress until it was destroyed by Timur's troops . In the 15th century, the Tsar became the seat of the Armenian Melik von Ober-Chatschen and was expanded into a larger fortress. The spiritual center here was the Dadiwank Monastery , built in 1214 , where the princes of Ober-Chatschen were also buried.

In 1750 the five Meliktuaries were subjugated by the Karabakh Khanate . The former royal seat of the Tsar was also destroyed and taken over by Turkish-speaking and Kurdish settlers in the following decades. However, the Armenian settlement remained around Gjulistan and Nerkin Shen. In 1813 the area came to Russia through the Treaty of Gjulistan , signed right here .

During the Soviet era , Shahumyan Rajon was formed in the almost entirely Armenian-speaking areas around Nerkin Shen and Gjulistan north of Nagorno-Karabakh Autonomous Oblast, but it was not assigned to the Autonomous Oblast. In the course of the Nagorno-Karabakh conflict , the Armenians were expelled from the area in 1991 and 1992. Azerbaijani OMON forces and units of the Soviet Army carried out " Operation Ring " (Операция "Кольцо") from April 30 to May 15, 1991 , according to Human Rights Watch, a campaign aimed at the centuries-old Armenian-populated villages to depopulate north and south of Nagorno-Karabakh Autonomous Oblast as well as in the Oblast itself. The operation was officially referred to as "passport control", but internally the aim was to disarm illegally armed Armenian formations. Military units surrounded the villages with tanks and took them under fire. Armenian leaders Tatul Krpejan and Simon Achikgjosjan , among others, died in the operations . About 17,000 Armenians from Shahumyan Raion were forced to leave the country. In December 1991, the Nagorno-Karabakh Republic declared Shaumyan Raion an integral part of Nagorno-Karabakh, but in the summer of 1992 the Azerbaijani army gained final control over the area that was now Armenian-free. Foamyanovsk was given the new Azerbaijani name Aşağı Ağcakənd in 1992 and was partially repopulated with Azerbaijanis - refugees from Armenia and Nagorno-Karabakh - in the following months . The former Shahumyan district was added to the Goranboy district.