Stepanakert ( Armenian Ստեփանակերտ , Russian Степанакерт ) or Azerbaijani Xankəndi is the capital of the Republic of Artsakh , a de facto regime claimed by Azerbaijan in the Caucasus region. The city in the valley of the Karkar (Qarqarçay) has about 50,000 inhabitants.

In the Middle Ages the city was called Vararakn ( Armenian Վարարակն 'Fast flowing river' ) according to Armenian sources , which is still reminiscent of the name of a small church. In 1847 it was renamed Xankəndi (other transcriptions Xankändi, Khankendi, Chankendi, Chankändi or Hankendi ). The Azerbaijani name Xankəndi is made up of Old Turkish word components. In the Azerbaijani / Turkish language, xan means "Khan" and kənd means "village". The term can thus be interpreted as the “village of the Khan ” and is to be seen in connection with the Karabakh Khanate . With the planned establishment as the regional capital in 1923 in Soviet times, the place was named Stepanakert after Stepan Shahumjan .

View from the south over the city

After the extensive destruction of Nagorno-Karabakh, Shusha , the largest city , as a result of the Shusha pogrom by Turkish and Azerbaijani troops in March 1920, the Soviet power soon afterwards decided to replace the previous village of Vararakn / Xankəndi with a new city as the capital of the city of the Azerbaijani SSR to establish the Nagorno-Karabakh Autonomous Oblast . This was named Stepanakert in 1923 after the Armenian communist Stepan Schahumjan , who was executed by social revolutionaries in Krasnovodsk in 1918 during the Russian civil war . The place grew rapidly, mainly due to the immigration of Armenians from the surrounding villages, and received city rights in 1940.

Road of the Liberators (Prospect Azatamartikneri) 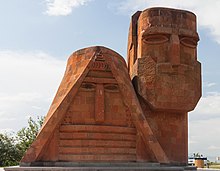 Armenian monument " We are our mountains " 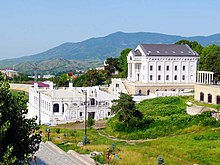 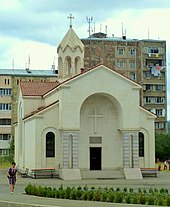 The independence of the Nagorno-Karabakh Republic from Azerbaijan has not been recognized internationally. The regional capital is still regarded as belonging to Azerbaijan, which instead of Stepanakert uses the name Xankanndi .

The National Assembly , the seats of the President and the Government of the Artsakh Republic are located in Stepanakert.

Stepanakert is now the seat of several universities, including the State University of Artsakh .

Stepanakert Airport , which was renovated by 2011 , but has no air traffic, is located eight kilometers southwest of the city near Chodjali .

According to Azerbaijani data, the city had 55,000 inhabitants in 2009, according to the local census of 2005 it was 49,300. Almost all Armenians live in the city , the Azerbaijanis have fled because of the conflict.

Although the majority of Stepanakert's inhabitants belonged to the Armenian Apostolic Church during the Soviet era , there was no church until 2007, because the Georgskirche (Surp Kevork) built at the end of the 19th century was demolished under Josef Stalin in the 1930s to make way for the Stepanakert theater building close.

On the northern outskirts of the city near the military cemetery there is a small medieval church on a piece of private land called Vararakn ( Armenian Վարարակն , German "fast flowing stream"), which has not been used for a long time. It bears the same name as the old Armenian village, in the place of which the Soviet city of Stepanakert was founded.

On May 9th, 2007, the 15th anniversary of the capture of Schuschi , the Jakobskirche (Surp Hakob) was opened. The construction was made possible by the patron Nerses Yepremian from Los Angeles .

Construction of the Cathedral of Our Lady began on July 19, 2006. The construction, initially projected for 2 million US dollars, was financed by its architect, Gagik Yeranosyan. The cathedral was consecrated and opened in 2019.