The Schaumburg costume is a traditional form of clothing used by the rural population in what is now the district of Schaumburg , which has survived until the recent past.

The tradition of wearing traditional costumes is dying out in the Schaumburg district . It is assumed that there are only around 10 of the traditional red-skirt women in the entire Schaumburger Land. Most of these are women over 80 years of age.

Today the costume is still maintained by traditional costume groups. 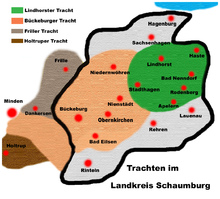 The distribution of the Schaumburg costume is concentrated in a belt of Bad Nenndorf , Lindhorst and Stadthagen in the east, and Bückeburg in the west of Schaumburg and the areas around the villages of Frille and Holtrup in the catchment area of ​​the city of Minden in North Rhine-Westphalia. The latter were created under the influence of Bückeburg, so that the "Lindhorster costume" and the "Bückeburg costume" can be seen as the two main variations.

The variations of the Schaumburg costume differ in the decoration and color scheme, but have a certain basic pattern.

There is also a distinction to be made between unadorned everyday or work clothes and Sunday or holiday clothes with elaborate decorations, black mourning clothes and church clothes with slight color modifications for attending church services . Of course , as everywhere, bride and groom were provided with particularly ornate clothing. Outstanding wedding jewelry for the Lindhorst women was a large bonnet adorned with pearls and mirrors . The Bückeburg wedding costume is black and white.

In the case of individual parts of the clothing, attention was not always paid to the purity of style. Women adhered to the clothing tradition more strictly and longer. In the case of financial difficulties, the motto was spun yourself, the best peasant costume is homemade!

The most important feature of the Schaumburg costume, known far beyond the region, is the red skirt , also called "buffalo", with an embroidered hem band, which the women wore. There were also blue skirts in some areas. This included an apron , the color of which varied, but was never monochrome. The outerwear included a short-sleeved jacket , the so-called doublet, and a shawl, which, depending on the occasion, replaced the doublet and consisted of sheep's wool in the work costume, simply looped around the upper body and tucked into the apron. The Sunday costume calls for a finer, white cotton cloth that is tucked into the doublet in front of the chest; the festive costume includes a silk scarf lavishly embroidered with pearls and flowers. A headscarf was usually worn with everyday costume . Only black leather shoes were chosen for the costume. Jewelry made of silver and amber was worn at festivals , mostly silver earrings and amber necklaces . The festive attire also included a more elaborate headgear, which caused a sensation, especially in the Bückeburg costume; the wing hood.

The men wore linen shirts with dark vests, long jackets and dark trousers. Knee breeches were often worn, often made of goatskin. The name "Böckse" for the trousers is derived from the billy goat. This included a cap. Depending on the season, the men wore a kind of pointed hat , peaked cap or fur hat .

Depending on the occasion, other items of clothing were added to this basic equipment. A distinction must now be made between different costume variations.

The Lindhorster costume is also called “Österten-Dracht” in Low German, it was worn by Ost-Schaumburgers. It was widespread in the area from Bad Nenndorf via Lindhorst to Stadthagen .
The main features of the festive Lindhorster women's costume are the red skirt with a wide hem band, the “want”, and the long, multi-colored apron. In addition, “Kaput” and “Bostdauk” are a sleeveless vest with lace trim and a “breast cloth”, knitted forearm warmers, the “handies”, embroidered shoulder cloths and a large white wavy ruff, the “neck”.
However, women's costume is not complete without the right hairstyle. The hair was pinned up, tied in a topknot, the "bun" or "punch" and placed on the forehead with hairpins and a fine hairnet . Over it the women wore a black banded bonnet, the “punch must”.

The Lindhorster men's costume consisted of a white linen shirt with a lace collar, black necktie and long or short-sleeved vest, the "Kaput", with two rows of buttons. Leather knee breeches and white linen smocks with brass buttons and black shoes were also worn.
Depending on the occasion, a kind of pointed hat, the “Pingelmüssen”, a fur hat, the “Ruemüssen”, or the black church hat, the “Kerkenhaut”, was chosen as headgear.

The Bückeburg costume , called the "Westerten-Dracht", was worn east of the Schaumburg Forest in the west of Schaumburg, from skirts near Bückeburg to Nordsehl near Niedernwöhren .
On festive occasions the women wore a linen shirt, the red band skirt with colored trimmings, an embroidered apron in many color variations, the doublet, an embroidered shoulder scarf, the ruff (here called "collar"), a breast scarf and knitted forearm warmers ("handschools") .
The most striking feature is the large black wing or bow hood with long ribbons, the so-called “cap”. A queder was tied around the waist.

The Friller costume was worn in the villages of the Frille parish near Minden on the Weser and in the Dankersen parish. The distribution area thus includes the villages of Frille, Wietersheim, Leteln , Aminghausen , Päpinghausen , Cammer and Dankersen with the district Hasenkamp. A special feature of the Friller costume is the high waistline of the women's and men's clothing. Skirts and trousers therefore reach just under the arms, a fad that has invaded this costume from the time of the Empire. The women's clothing is dominated by the striking red wool skirts, although black skirts were also worn for special occasions (Last Supper). The petticoat has a peculiar blue-purple color and blue wool skirts or red linen skirts were worn to work. In addition to the top and underskirt, a long linen shirt, a pair of woolen stockings with patterns, an apron with a queder, a long-sleeved jacket with ribbon trimming, a so-called binnewams, which is a vest-like garment with ribbon trimming, belong to the complete clothing of women for Sunday church attendance. a small white, folded collar, a so-called scarf with fringes, a pair of hand fingers for the forearms, an embroidered shawl with flower tendrils, the typical small hat made of silk ribbon and usually also an amber necklace, in winter a coat.

The men wore a long white linen smock with a red lining. Despite the many hemispherical buttons, it was usually not closed. This included the colorfully patterned velvet vest with 24 covered buttons, a long-sleeved linen shirt with a collar made of needlepoint, long black cloth trousers with flaps that reach under the arms, a colored silk neckerchief, black stockings, boots or black loafers and a fox fur hat.

Other forms of the Schaumburg costume

The formation of groups and the delimitation of individual localities led to variations in the decoration of the clothing or the shape of the headgear. But geographical differences and influences from neighboring regions also led to different characteristics.
The Holtrup costume was worn in and around Holtrup near Porta Westfalica , south of Minden . The women of Holtrup wore red or black skirts with narrow hem bands and small punched caps. The embroidery of the aprons was also more economical than with the Westerten costume.
The Apelern costume was a completely unique form of costume in the parish of Apelern and was exchanged early on for the garments of the Nenndorfer and Lindhorster costume, it was only preserved in the form of headgear.
The Nenndorfer Tracht was a variant of the Östert Tracht that could be distinguished from the Lindhorster Tracht , which was characterized among other things by the retention of the so-called wall skirt into the 20th century.

You can find detailed and vivid exhibitions on traditional Schaumburg costume in the regional museums.