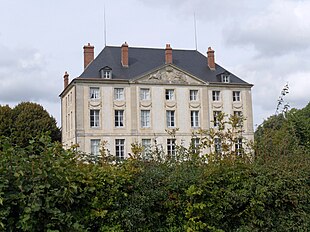 The Montjalin Castle ( French Château de Montjalin ) is a classicist castle in the Montjalin district of the Burgundian municipality of Sauvigny-le-Bois , around 5.5 kilometers northeast of Avallon . It was built in the second half of the 18th century by order of the Fresne family to replace a medieval castle . In the Second World War by German soldiers badly damaged, the building fell into disrepair after the war visibly before Olivier Delafon bought the run-down property in 1987 and restored . The castle stands as a monument inscribed (since May 20, 1988 French Monument historique inscrit ) under monument protection .

Montjalin Castle on a photograph before 1915, view from the southeast

In the Middle Ages, Montjalin belonged to a noble family of the same name . One of its members, Hérard der Montjalin, built a fortified castle on his estate in 1147. This complex was demolished by César de Fresne in 1766 or 1768 and a Louis-seize-style castle was built on the same site . Later, when the French Revolution broke out, revolutionaries damaged the building by chipping off the de Fresne family's coat of arms from the facades. However, they left the rest of the sculpture untouched. During the Second World War, Montjalin Castle was badly damaged by German soldiers. After the end of the war, a farmer bought the property but did not take care of repairs and maintenance.

In 1987 Olivier Delafon, a former hedge fund manager, bought the dilapidated facility, which at the time had neither windows nor a roof. The purchase price was only 120,000 euros at the time, but the new lord of the castle and his wife had to invest another four million euros for the restoration and repair of the castle. Work on this was completed in 1991. The main building was given a new interior design, but based on historical models, starting with patterned wallpaper and damask curtains to furniture from the time the castle was built.

In 2000, the lord of the castle, who is a passionate car collector, opened the curious and interesting museum for state carriages ( Musée des Voitures de Chefs d'Etat ) in the former horse stables of the castle . The main attractions among the approximately 30 exhibits in the permanent exhibition were the Lincoln of US President John F. Kennedy , the Popemobile of Pope Paul VI. and the Citroën DS 23 from French President Valéry Giscard d'Estaing . Up to 5,000 visitors viewed the cars on display each year.

The State Vehicle Museum closed its doors in December 2010, and the valuable vehicles found new owners at auction. But even today, many old classic cars from Delafon's possession can still be seen in the farm buildings, although they are no longer former state cars, but mostly old sports cars. In 2015, they still attracted 3,500 visitors. In October 2017, Montjalin was up for sale for 2.4 million euros.

Schematic map of the Montjalin Castle

The castle stands on the highest point of a small elevation north of the village center of Montjalin in the Morvan region . The property includes a park of around seven hectares in a forest area of ​​about the same size. The main building and the associated farm buildings are enclosed by a wall that surrounds a square area. Access is granted through a wrought-iron gate between two massive house pillars on the north side of this walled area. An avenue around 320 meters long leads straight to the gate from the northwest .

The main building is a rectangular building with three floors, which are closed by a slate-covered hip roof. The storey height decreases from bottom to top, which can also be seen very well from the size of the rectangular lattice windows. These divide the long sides into seven axes . Sculptural decorations under each opening on the second floor are festoons which, in contrast to the coats of arms on the facade, survived the French Revolution unscathed. The ground floor stands a little higher on a basement with vaulted ceilings and is clearly separated from the first floor on the facade by a cornice . The narrow western side of the building is adjoined by a terrace with a stone parapet at the level of the ground floor . A single flight of stairs leads up to it. The facades have the strict lines of classicism. They are by pilaster divided vertically. The middle three axes are accentuated like a risk. In addition, they are crowned by a triangular gable. On the northern entrance front it shows a round window that is surrounded by festoons. The southern gable is more richly decorated: a lion and an angel hold two heraldic shields there, which are crowned by a crown. The entrance door is in the central axis of the building on the north side. A horseshoe-shaped staircase with two runs and a wrought-iron railing leads up to it.

The palace complex includes farm buildings northwest of the main palace. They consist of an orangery , a dovecote , the former horse stables, a saddlery and accommodation for the castle administrator. There are also two barns and studios . The 750 m² exhibition area of ​​the former museum in the horse stables and one of the barns can now be rented for events.

The castle building has a total living area of ​​1500 m². This is distributed over 30 rooms, of which 14 are bedrooms and seven are bathrooms. On the ground floor there is a vestibule with flooring made of Burgundian stone, a large and a small salon , a dining room, a billiard room and a kitchen. This area, intended for representative purposes, has ceiling heights of 4.5 meters.