The presence of the Romans is proven by finds in some localities of today's district. After the area was conquered by the Moors during the Reconquista , it was given to the Lorvão Monastery in 985 . The place was then called Mortalago , based on the name given by the Romans after the drainage of an approximately 30 square meter lake by cutting off a tributary on a rock in the south of today's place in the first century (in today's Portuguese derived from: Morte = death, and Lagoa = Lake). After being taken again by the Arabs , Mortalago, from which the current name developed, was finally recaptured between 1058 and 1064 by Ferdinand I (León) .

Mortágua received its first town charter ( Foral ) after the independence of the Kingdom of Portugal in 1192 , which were renewed in 1403 and finally in 1514 .

In the course of the Napoleonic Wars on the Iberian Peninsula , French troops moved several times through the Mortágua district, where they camped before the Battle of Buçaco on September 27, 1810 .

From 1854 the municipality of Mortágua had fallow land and areas unsuitable for agriculture afforested, especially with Iberian pine species . As a result, up to two thirds of the area of ​​the district became forest areas. The reservoir Barragem da Aguieira , on the Rio Dão , which was completed in 1979 and opened in 1981, was also of importance for the district . 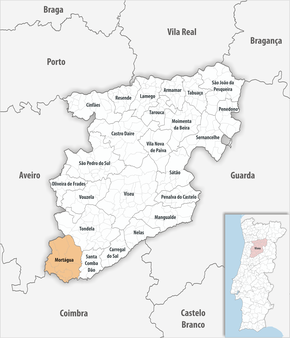 Mortágua is on the Linha da Beira Alta railway line .

The through road IP3 and the national roads (EN, also N) 234, 334-1 and 228 lead through Mortágua, which will also receive a motorway connection with the planned continuation of the A35 .

Municípios in the district of Viseu