from Wikipedia, the free encyclopedia
This is the spotted version , flagged on February 28, 2020 . There is 1 pending change that has yet to be viewed.

Today's Águeda district has a large number of finds from Roman times, especially at the archaeological excavation site Estação Arqueológica de Cabeço do Vouga . Presumably the Roman road from Aeminium (today Coimbra ) to Cale (today Gaia ) crossed the place. The place name is derived from the river running here, which was already known as Ágata in the 9th century . A document from 1050 mentions a number of vilas (small towns) in what is now Águeda County, many of which have names derived from Arabic .

The place was known as Casal Lausato before taking the name of the river as Agatha and then in the 11th century as Ágada . For its part, the river was originally named after Saint Agatha .

The current town of Águeda was probably built in the 11th or 12th century, during the repopulation during the Reconquista . A report by officials from Aveiro confirmed in 1451 , although a growing place that then but still did not receive their own civic rights, but in Aveiro city charter of 1515 by King D.Manuel I was wisely. Assequins, today a place of the municipality of Águeda, was given its own city rights by the king.

On December 31, 1853 , the independent district of Águeda was created. Industrial development followed, reinforced by the arrival of the railroad in 1908. On August 14, 1985 , the town, which had been a small town (Vila) since 1834, was elevated to a town (Cidade).

Águeda has an interesting handicraft heritage in pottery, basketry, weaving, cooperage and lace making. The villages Urgueira , Macieira de Alcoba or Lourizela , which have retained an authentic rustic flair, are worth visiting . There are several folklore groups in the district.

Among the many churches, chapels and crossroads in the Águeda district, the Panteão dos Lemos in the Trofa do Vouga municipality deserves special attention.

Other places of interest to the visitor are the Pateira de Fermentelos (the largest natural lake on the Iberian Peninsula ) and the Roman excavations of Cabeço do Vouga .

The most famous specialty is the Barraida-style suckling pig ( Leitão assado à Bairrada ). The wines and sparkling wines of the Bairrada are also known. There are also some traditional desserts from Águeda: Pastéis de Águeda , Barriga de freira , Fuzis e Sequilhos , Regueifa , and the Padas da Veiga .

The football club Recreio Desportivo de Águeda , founded in 1924, played a season in the First Portuguese League after a few seasons in the Second Portuguese League in 1982/83 . After the following financial problems and relegations, he now plays at the district level. The club plays its home games in the Estádio Municipal de Águeda , which has a capacity of 10,000 .

Other associations in the district are the Associação Desportiva Valonguense (from Valongo do Vouga), the Sporting Clube de Fermentelos , founded in 1930 , and the União Desportiva Mourisquense, founded in 1949 from the town of Mourisca do Vouga, in the municipality of Trofa.

The following eleven municipalities ( Freguesias ) are in the Águeda district: 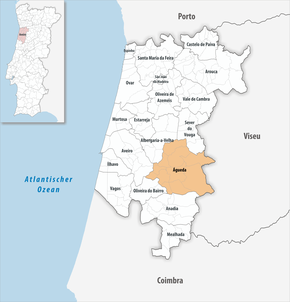 These include a town ( Cidade ), Águeda , and three small towns ( Vilas ): Aguada de Cima , Fermentelos , and Mourisca do Vouga in the municipality of Trofa, Segadães e Lamas do Vouga .

The region around Águeda is very fertile; corn, fruit and wine are grown and wood is extracted. Some of the municipalities in the Águeda district are located in the wine-growing region of Bairrada , which, in addition to its internationally sold wines, is also known nationwide for its suckling pig.

In addition to agriculture, trade and industry are important. The metalworking industry in particular is based in Águeda. a. Engines, motorcycles and bicycles are produced.

The Águeda train station at night

The Linha do Vouga railway passes through the Águeda district at several stops.

Junction 15 ( Aveiro Sul ) of the A1 motorway is in the Fermentelos municipality . The national road N1 bypasses the district town of Águeda as expressway IC2. It connects the town to the A25 motorway, which runs about 15 km to the north, and leads 40 km south to Coimbra .

Águeda is integrated into the national bus network of Rede Expressos .