Estarreja is located 15 km north of the district capital Aveiro . Not far from the Ria de Aveiro to the west , narrow canals and rivers run through the town and the surrounding plains.

Finds prove the presence of humans in the municipality since the Neolithic . Also Celtiberians , Romans and Arabs settled here. The first documented mention of Villa Antoan , today's Antuã, dates back to 569 . Its administrative territory included Beduído , Salreu , and the Rio Antuã river . In the 11th century, the place Estarreja began to form here.

1257 handed over to King Alfonso III. the parishes of Antuã and Avanca to the monastery of Arouca . In 1519, King Manuel I renewed the city rights for the Vila (small town) Antuã and its district, which later became Estarreja. In the middle of the 17th century, the district also took the name of Estarreja.

At the beginning of the 19th century, the district suffered destruction and looting by French troops during the Napoleonic Wars on the Iberian Peninsula .

With the opening of the Linha do Norte railway line in 1862 , Estarreja experienced some boom. So it became, after Aveiro, the second largest salt port in the country. In particular, medium-sized food industries settled here, including the milk processing companies, which were co-founded by the later Nobel Prize winner Egas Moniz in 1923 and which was the first milk powder factory in the country before it was later taken over by Nestlé . Since the middle of the 20th century, a focus of the country's chemical industry has developed here. At the end of the 20th century, the group began to reorientate towards sustainability and environmental protection . With the Eco Parque Empresarial, an environmentally friendly commercial area was created, and in 2003 , BIORIA, a nature reserve on the edge of the Ria de Aveiro lagoon landscape, was established.

Estarreja is a stop on the Linha do Norte railway line , and is located on the A1 and A29 motorways , each with its own exit .

Estarreja is the seat of a district of the same name. The neighboring districts are (starting clockwise in the north): Ovar , Oliveira de Azeméis , Albergaria-a-Velha and Murtosa .

The following municipalities ( freguesias ) are in the Estarreja County: 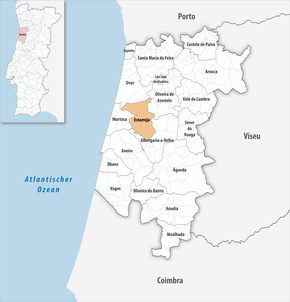 The football club Associação Atlética de Avanca , founded in 1937 , from the municipality of Avanca , played in the meantime in the third division, the then IIª Divisão , most recently in the 2007/08 season. He is now in the first division of the Aveiro district association, the 1ª Divisão do Campeonato Distrital da AF Aveiro (as of 2014/15).