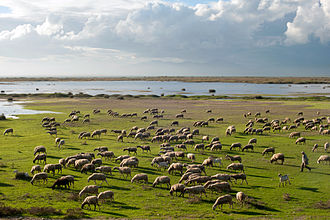 Shepherd with flock in Greece

Commercial sheep farming includes the care, breeding and utilization ( milk , meat , wool , leather ) of sheep . The training occupation of the shepherd (outdated: shepherd) has the official designation animal host , specializing in sheep farming . Before training, you only complete a year of vocational primary school (BGJ) in Bavaria . The training lasts three years with a final exam. There is then the opportunity to take the master craftsman examination .

Sheep are mostly kept in flocks , which a shepherd looks after with the help of shepherds or herding dogs . It is typical that the shepherd leads his herd ' nomadic ' through open, generally accessible land (wandering shepherd), while other cattle are usually in the stable or on the pasture that belongs to the farmer. A distinction is made between herding and coupled sheep farming.

The shepherd's profession is not limited to producing sheep meat and lamb's wool. The prices of sheep meat and wool have fallen significantly in recent years. A shepherd is also a landscape manager, because the landscapes that are not grazed by sheep would otherwise be overgrown with trees and bushes within a short time. The European Union provides funds for the activity as landscape maintenance.

The shepherd's job in his specific job is to find feeding places, to keep the herd together and to protect it from danger. In the past, some shepherds stayed overnight in small wooden shepherd carts right next to their flock. A traditional tool is the shepherd's shovel .

Duties of the shepherd

Flock of sheep on a stubble field in the Rhön

One of the duties of a shepherd is

Sheep is one of the oldest trades in the world. The domestication of the sheep began 10,000 years ago in Asia Minor and from there it has spread across Asia and Europe . In the past, sheep farming was considered a dishonest profession . Today it plays a rather subordinate role in agriculture in Europe, while it is still practiced as a subsistence economy , especially in Asia and Africa .

Recent history using the example of the Rhön

Various forms of sheep farming have come down to us from old files from the bishopric of Fulda , especially from the 18th century:

At the beginning of the 20th century, sheep were mainly kept in community, cooperative and in some areas traveling sheep farms. In 1913 there were 56 community sheep farms and 256 cooperative herds in Hessen-Nassau .

Sheep farming in the GDR

In the GDR were sheep primarily for wool production held. In this way foreign currency for the import of sheep wool from Australia or New Zealand could be saved. This led to the build-up of 6,000 sheep herds with 2.65 million animals (entire Federal Republic of 2018: 1.6 million animals). 90% of the lamb was exported to the Federal Republic and the Arab region. Each LPG was obliged to keep a flock of sheep. Around 6,000 shepherds were employed in the GDR, and the young professionals were trained at a special shepherd school. After the fall of the Wall there was no longer any need to procure foreign currency and the sheep population fell significantly.

Title page of the Scheffer order from 1578

“A shepherd must also be able to play a wind instrument, not because of the old madness that the sheep should get fat more from the music than from grazing and feeding, but because the sheep (as experience confirms ) before other animals, especially those who love music: they love it immensely, and are thereby very lively. In addition, it is very convenient for the shepherd to be able to command his flock with the flute: as do the foreign shepherds who hold them together with certain bits on their bagpipes, call them to themselves, and drive them away again. "

- Friedrich Wilhelm Hastfer: Extensive instruction given on the maintenance of the best kind of sheep, for the common good. Leipzig 1785

In 2017, the Federal Association of Professional Shepherds in Germany counted 989 full-time shepherds and 1.1 million ewes, 0.6 million fewer than in 2001. According to the "Schafsreport Baden-Württemberg", the average wage was 6.15 euros per hour.

Many artists have quoted this symbolism in their work, for example Johann Georg Mohr with depictions of shepherds in the Taunus.