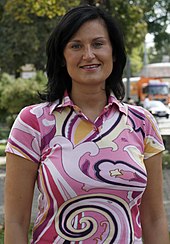 She gained her first political experience in high school. There she was first head of school at her school and was involved in the state and federal student council. Afterwards she was regional chairwoman of the Burgenland student union and federal chairwoman of the Austrian student union, where she campaigned for a modular system in the upper secondary school and for political education in schools.

Grünberger came to the Junge ÖVP Burgenland through school policy . She first became a member and later finance advisor on the board. In 1999 she was elected federal secretary of the Young ÖVP and in October 2001 she was elected federal chairwoman (91% of the delegates' votes). She was confirmed in her function for the first time in October 2004 (64.7%, one opposing candidate) and again at the end of September 2007 (53%, no opposing candidate). On May 4, 2009 she resigned as federal chairwoman of the young ÖVP.

On June 18, 2013, she declared that she no longer wanted to run for the National Council and on October 1, 2013, she switched to the private sector and a communications consultancy.

In Austria she became known to a wider public in February 2004 when, in the course of a discussion about possible reductions in pensions by around 10 euros per month, she remarked: “For 10 euros you can buy three sausage rolls at BILLA . ”This comment sparked great public outrage, there was even criticism from within the own ranks, and the opposition parties at the time ( SPÖ and Greens ) described it as proof of how“ aloof and unworldly ”Grünberger was. Grünberger said in May 2009 that this statement was only meant as a metaphor.

Within the Young People's Party , Grünberger's leadership style (sometimes criticized as “idiosyncratic” or “authoritarian”) was not always undisputed. Her resignation was therefore preceded by lengthy internal discussions.