This article is about Sophie Charlotte Auguste, born Duchess of Bavaria. For people with the same or similar name, see Sophie von Bayern (disambiguation) . 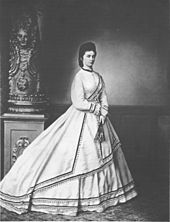 Sophie Charlotte was the ninth child and fifth daughter of Duke Max Joseph in Bavaria and Duchess Ludovika , a born princess of Bavaria. Her older sisters were among others the future Empress Elisabeth of Austria and the last Queen of Naples-Sicily, Marie in Bavaria . Like her siblings, she spent most of her childhood at Possenhofen Castle on Lake Starnberg near Munich. After all of her sisters were married, from 1861 she was the only daughter still living there with her parents. She was close friends with the two years older Crown Prince Ludwig of Bavaria , who was to ascend the royal throne as Ludwig II of Bavaria in 1864. Both shared their love for Richard Wagner's music and nature. Since Sophie had a beautiful singing voice and also played the piano well, she often had to sing arias to Ludwig from Wagner's operas.

Since she was the sister-in-law of the Austrian Emperor Franz Joseph I , there was no shortage of applicants for her hand. There were marriage plans with Duke Philipp von Württemberg († 1917), Prince Louis of Portugal and finally with Ludwig Viktor of Austria , the homosexual brother of the Austrian emperor. Sophie couldn't make up her mind to take this step. 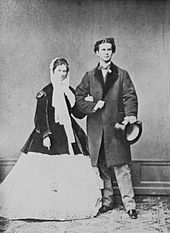 Since Sophie's contact with King Ludwig II remained close, Duchess Ludovika decided to ask the king about the seriousness of his dealings with her daughter. The king reacted very sensitively to the openness of his great-aunt (Ludovika was the half-sister of his grandfather King Ludwig I) and decided to avoid Possenhofen from this point on. Ludovika then forbade her daughter to have contact with the king. Then Ludwig II decided to marry his father's cousin. The engagement was announced on January 22, 1867. During a performance in the court theater, Ludwig took Sophie into the royal box and she took a seat next to him.

The Bavarian king soon became very uncertain about his decision. He was afraid of entering into a wedlock and was afraid - precisely because he was not indifferent to Sophie - that he would not be able to make her happy. He moved the wedding date, which was initially planned for August 1867, to October. Duke Max in Bavaria, Sophie's father, wrote Ludwig a letter in which he asked to keep the promise of marriage because he saw his daughter compromised because of the multiple postponements of the wedding. At the same time, Ludwig wrote a farewell letter to Sophie. The engagement was broken.

Three days after her engagement to Ludwig, Sophie met his son Edgar in Franz Hanfstaengl's photo studio , who had only returned to Munich from abroad after completing extensive training as a commercial clerk. Sophie and Edgar had probably known each other since childhood, as Franz Hanfstaengl was a welcome guest in Duke Max's “Arthurian Round”, where mostly bourgeois scholars and artists met. Because of the many photographs that had to be made of the royal bride, and because of the reorders that always brought Edgar to Possenhofen, they got closer and fell in love. This created great difficulties for Sophie. With the help of two ladies-in-waiting, Natalie von Sternbach and Antonia Pfretzschner, secret meetings were arranged from now on. Their creation was mostly extremely complicated, since absolute secrecy always had to be observed. After all, nobody was allowed to find out that the future Queen of Bavaria had a relationship with a commoner. These meetings took place alternately in Schloss Pähl , the Palais in Munich and even in Possenhofen.

Five love letters that Sophie Charlotte wrote to Edgar Hanfstaengl between July and September 1867 have survived. Erna Hanfstaengl, Edgar's only daughter, handed the letters over to the Munich photographer and author Heinz Gebhardt shortly before her death, despite her father's instructions to burn them unread, with the request that “this matter be put right one time”. After verifying their authenticity, Gebhardt published the letters and made the affair public.

Duchess Ludovika had meanwhile been on the lookout for a new marriage candidate for Sophie in order to make the shame of the broken engagement forgotten as soon as possible. As a possible candidate, she envisaged a grandson of the last French king, Duke Ferdinand von Alençon . She arranged a meeting of the two at the Saxon royal court. Ferdinand, who was enthusiastic about Sophie, asked for her hand on June 19, 1868. On June 29, 1868 Ferdinand traveled to Possenhofen to introduce himself to his future in-laws. On September 28, 1868, the wedding took place in a hall of Possenhofen Castle. Prince Chlodwig zu Hohenlohe-Schillingsfürst , who was the guest of the wedding as the Bavarian Prime Minister, noted that the Duchess's 'yes' sounded as if she wanted to say 'yes' or 'for my sake' .

The couple soon left to travel to Bushy House near Teddington after visiting relatives , where the couple would live for the near future. Since the Revolution of 1848, members of the French royal family were forbidden to enter France, so they had to live in exile, mostly in England. Sophie didn't feel at home in dreary England. In a letter to her mother she wrote of the rain-soaked darkness that surrounded her in her new home.

The first years of marriage of the Duke and Duchess of Alençon can be described as harmonious. Received letters from Sophie Charlotte spoke of a great longing for Ferdinand when they were apart for a few days. On July 19, 1869, Sophie's daughter Louise Victoire was born in Bushy House . Their son Philippe Emanuel was born on January 18, 1872 in Merano .

Shortly after the birth of Emmanuel, Sophie set foot on French soil for the first time. Her new home was a house in Vincennes .

Sophie's health in the early 1970s was of major concern. Her illness was made worse by severe depression. Ferdinand therefore decided to spend the summer months of the year in Bavaria, where Sophie visibly flourished in dealing with her siblings, who all gathered around Lake Starnberg.

Portrait of Sophie Duchess in Bavaria in 1867 by Joseph Albert .

After the mysterious death of her former fiancé, King Ludwig II of Bavaria , Sophie Charlotte fell seriously ill in 1886. On the advice of her brother Dr. Carl Theodor in Bavaria sought medical treatment for Sophie Charlotte in Munich. In the winter of 1886/87 she fell in love with the doctor who treated her. In the previous literature this was only known as “Dr. Glaser "known. The historian Christian Sepp succeeded in identifying this as the general practitioner Dr. Identify Franz Joseph Sebastian Glaser. Dr. Glaser was a year younger than Sophie, married to the daughter of a Russian State Councilor and the father of three children. Like almost twenty years before, when she thought she could no longer live without the photographer Edgar Hanfstaengl, she risked losing her social position this time too. But this time she went one step further: she confidently intended to divorce her husband Ferdinand in order to protect Dr. To be able to marry Glaser, who also wanted to get a divorce.

In the previous literature one could find repeatedly the claim that the couple wanted to flee to Switzerland together, but were picked up and separated in Merano . However, the latest source research shows that Sophie had been in Merano with her husband and daughter since May 1887. When the Duchess did not want to give up her divorce plans, she was confronted in June 1887 with a medical college that had been convened and declared that Sophie Charlotte had suffered from " moral insanity ". In other words, the Duchess was assumed to be no longer able to distinguish between morally correct and morally wrong behavior. They have to be placed in a sanatorium for treatment. One tried to cover up the events in Merano as far as possible. The dramatic escalation of the conflict is primarily transmitted through the diary entries of her niece, Duchess Amélie in Bavaria .

The Duke of Alençon, on the advice of his brother-in-law Dr. Carl Theodor in Bavaria Sophie Charlotte in the well-known sanatorium Maria Grün of the neurologist Richard von Krafft-Ebing near Graz , where they specialized in the treatment of "sexual abnormalities". The treatment included pouring ice water over them. Sophie Charlotte was under strict surveillance, including intercepting her letters that she tried to send to Dr. Glaser to send and handed them over to her husband. After a stay of seven months, Sophie Charlotte was considered "cured" and was allowed to leave the sanatorium. Their plans for divorce were a thing of the past. In January 1888, Sophie Charlotte met her sister, Empress Elisabeth , and her family again in Vienna . Her niece, Archduchess Marie Valérie , noted in her diary: Aunt Sophie (with Uncle Alençon with Mama [Empress Elisabeth]). Absolutely the former Aunt Sophie, only rejuvenated when possible ... blooming ... calm cheerfulness, no trace of excitement, of shame ... absolute riddle ... best agreement with Uncle Alençon.

Sophie died on May 4, 1897, during the fire of the Bazar de la Charité on Rue Jean Goujon in Paris, because she refused to leave the building until all of the girls entrusted to her had been "brought to safety". Her coffin was transferred to the Chapelle royale Saint-Louis , the burial chapel of the Bourbons, in Dreux .

In the previous film adaptations of the life of Ludwig II of Bavaria, Duchess Sophie in Bavaria appears as a minor character. In the 1955 film adaptation of Ludwig II - Shine and the End of a King , Marianne Koch plays the king's brief fiancée. In the historical film drama Ludwig von Luchino Visconti from 1972, the French actress Sonia Petrovna embodies Sophie in Bavaria. In the latest film adaptation from 2012 by Marie Noëlle and Peter Sehr , Paula Beer plays the young duchess. In 2000, a two-part series was also produced for RTL that focuses on Sophie's fate. The title role in Sophie - Sissi's little sister is played by Valerie Koch .