The species has a runners-like elongated rhizome. 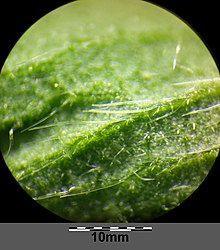 The foliage leaves are covered with tufted hairs on the underside, in which the central ray is much longer than the lateral rays.

The flower stalks are covered with glandular hairs and arching ascending glandeless hairs. 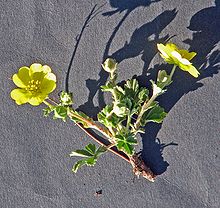 Tuft of hair from the surface of the leaves

The star-haired spring cinquefoil is a perennial herbaceous plant that reaches a height of 5 to 15 centimeters. Since the rhizome forms runners, it comes to a lawn-like cushion growth. The leaves, which are usually five or rarely seven-fingered, are pale green. The leaflets have three to nine teeth. The leaves are loosely haired and show star-shaped serrated hairs at least on the edge and underside: on small pustules there are two to twelve tiny (0.05 to 0.1 mm long) unbranched individual hairs, in the middle of which there is a strong one up to 1.2 mm long Curry hair. However, the hair does not form fur felt in contrast to the sand cinquefoil ( Potentilla arenaria ). The lower stipules are narrowly lanceolate.

The flower stalks, which arise individually in the axils of the leaves, are hairy and stick out and almost always have long-stemmed glandular hairs. The five-fold flowers have a diameter of 8 to 12 millimeters. The golden yellow petals are slightly edged.

The flowering period extends from April to June. The star-haired spring cinquefoil shows a multi-level ploid series , with the chromosome numbers 2n = 28, 35, 42, 49, 56 and 70.

The pollination is done by insects.

The star-haired spring cinquefoil is a purely European plant species that is widespread in the entire Alpine region from the Maritime Alps to Lower Austria . The southern border of their area runs through northern Italy and Dalmatia to Bosnia-Herzegovina. To the east, the distribution limit runs through western Hungary, the Czech Republic and Poland. Their occurrence in Slovakia is questionable. In Germany, the star-haired spring cinquefoil is not only found in the Alps and in the Alpine foothills ( but possibly lost in Baden-Württemberg ), but can also be found in the Franconian Alb , and to the north as far as the Harz foothills and Upper Lusatia . However, as a critical species, further distribution is definitely possible.

This cinquefoil prefers dry to rocky grasslands and rises in the Alps to altitudes of 2350 meters. But it also occurs on sandy soils along rivers, as well as in sparse pine forests, on embankments and in park lawns. In Central Europe it is a species of the order Festucetalia valesiacae. In the Allgäu Alps, it rises in the Tyrolean part on the southern slope of the Rotwand up to an altitude of 1,300 meters.