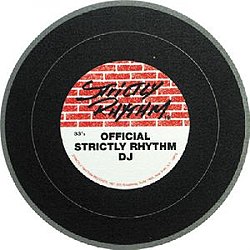 Strictly Rhythm is a house music label . The logo with the brick background was designed by founder Mark Finkelstein .

George Morel , produced the third Strictly Rhythm maxi under the alias Sir James in 1989. "Special". This is one of the most sampled house records. Strictly Rhythm's first club hit was Logic's 1990 "The Warning", a project that Roger Sanchez was also involved in.

In the mid-90s, Strictly Rhythm was the leading international house music label. Several records achieved chart placements, such as "I Like To Move It" by Reel 2 Real . A total of five Reel 2 Real tracks appeared in the Top 30, and his album was awarded the gold record . Also known is the track "Higher State of Consciousness" by Josh Wink .

Strictly Rhythm finally reached the peak of its success in 1997 with Ultra Naté's song "Free", later the hits "Found a Cure" or "New Kind of Medicine" appeared. Strictly Rhythm was particularly successful in England. With “King of my Castle” by Wamdue Project , 1999 was the first to hit number one in the UK charts.

Warner Music bought the majority and wanted the label to work like a major. The two business models did not seem to fit together as Warner ceased operations in 2002. At the end of 2006, the label's operations were resumed thanks to friendly support from the successful British label Defected by the founders Mark Finkelstein and Gladys Pizzaro.