KT8D5 is the type designation of a bidirectional articulated railcar from the Czechoslovak manufacturer ČKD Tatra . Of the vehicles delivered between 1986 and 1999, there are a total of 205 examples, of which only one is still in Germany . 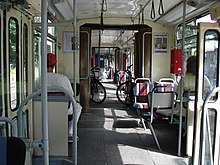 In the early 1980s , the Czechoslovak Ministry of the Interior, which was also responsible for traffic, commissioned ČKD Tatra to build two-way articulated vehicles. The vehicles should be three-part and eight-axle. The first prototypes of the vehicle known as KT8D5CS (where CS stood for Československo ) started running in Prague in 1984 . After about two years of trial operation, a few copies were initially delivered to individual Czechoslovak companies, including Prague, Plzeň and Košice . They had a different roof structure for the later series. Series production started in the same year.

The wagons are designed for solo operation, but can also drive as a double traction.

In 1995 the Strausberg Railway bought three surplus cars from Košice. After minor adjustments, the cars were given the numbers 21 to 23.

Further KT8D5CS were delivered to the Hungarian city ​​of Miskolc from 1997 .

In 1990 45 cars were delivered to the North Korean capital Pyongyang . The first car with the number 1001 is considered to be the first commissioned car on the Pyongyang tram , and pennants are still a reminder of this today. Some also operate on the Ch' Chngjin tram . Another car of this series was also given to the Sarajevo tram in 1990 . This is still in use today under road number 300. In Pyongyang, the KT8D5K are currently being extensively modernized. You get an almost new vehicle body and new fronts, but no low-floor center section. The donor vehicle can be easily recognized by the bogies and roof structure.

A single railcar was delivered to the Moscow tram . After mainly using the N1 line, it later came to Volgograd with the number 5834, where it is used on an underground tram route. It is no longer in operation. The car is now in the Moscow Tram Museum. It is the only KT8D5 from the pilot series that is still in the original.

The KT8DN is a KT8D5 railcar, the middle section of which is a low-floor design. In Brno (Brno) 1998 first cars of this type were put into service. They are the only KT8DN with swing-out doors. In the following years, the middle parts of other companies were also converted to low-floor as part of modernization measures, but the folding doors were retained. In Prague, the lower part of the car body was changed and the bogies covered. Strausberg's KT8D5 has the same modernization as the Prague one, but it is painted yellow. In addition, Prague bought almost all of the KT8D5s from Miskolc, which were replaced there by new low-floor wagons and immediately converted them to KT8d5N. In Ostrava , it was also converted into a one-way trolley.

The Tatra RT8D5 was later developed from the KT8D5 for the Manila light rail system.

ČKD Tatra also planned the KT8A5 and KT8C5. the KT8A5 would have been a three-unit car based on the Tatra T6A5 . And the KT8C5 the bi-directional variant. The electrical equipment and the doors should be taken over from the Tatra T7B5 .